1 Day trip to Berat and Durres 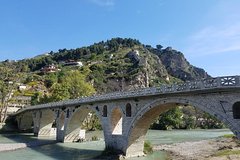 1 Day trip to Berat and Durres

Founded back in the 4th century B.C, Berat present a remarkable history through different ages from ancient Illyrians to Roman Empire, Byzantine to Ottoman Empire. The city has everything to show into its three main neighborhood The Castle, Mangalem and Gorice. Since 2008 the city is listed under UNESCO world heritage site.

This tour starts in capital Tirana. After pick up at hotel lobby we will drive for around 2 hours to the beautiful city of Berat. First we will visit the famous Castle of Berat, built on a rocky hill on the right bank of the river Osum. Inside the castle you will visit different medieval christian churches, and the most preserved Dormition of St. Mary. Besides churches, in the castle you will feel how the life used to be in old times through the remains of the water cistern, acropolis, red and white ottoman mosque. Our visit continues to National Ethnographic Museum.

In the afternoon transfer to Durres, home to the biggest and oldest port in Albania.

While walking in the castle, you can enjoy the narrow streets and the local traditional houses. Inside the castle you will visit different medieval christian churches, and the most preserved Dormition of St. Mary.

Inside of a christian church is founded Onufri museum displaying objects and medieval painting from Albania.

National Ethnographic Museum is an 18th century two floor house where you can discover tradition and culture of Albanians.

Neighborhood with ottoman houses located on the side of Osumi river

It was built in the 15th century during ottoman period from Sultan Bayezid II.