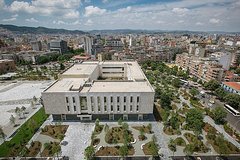 Bordered by the Ionian and Adriatic seas, this Eastern European country has beautiful beaches, exquisite mountain scenery and fascinating museums.
After World War II, Albania was isolated behind the Iron Curtain under the communist leadership of Enver Hoxha.
The capital and largest city, Tirana, is in central Albania. Understand the regions past from the ancient days of Illyria to modern times with a visit to the National History Museum. Abandoned bunkers from Hoxhas regime provide the setting for BunkArt, which presents performance and visual arts examining the countrys communist legacy.
Find more castles across the country. The Kalaja or Berat Castle originated in the 4th century B.C., with medieval additions creating a wall with 24 towers encircling a town. Gjirokaster Castle was built in the 12th century, served as a prison in the mid-1900s and now houses an arms museum with relics from World War II and Albanias fight for independence.

Stop At: Skanderbeg Square, At the center of Tirana, Tirana Albania
Meeting at the airport with our representative and transfer to the hotel. Afternoon free to explore the capital. Overnight in Tirana.
Duration: 3 hours

No meals included on this day.
Accommodation included: 3-4* hotel in Tirana

Stop At: Berat Castle, Rruga Mihal Komnena, Berat 5001 Albania
After breakfast we depart for a full daytrip to the stunning museum town of Berat, a well-preserved Ottoman city. We will start our visit from the lower part of the town, visit the Leaded Mosque, so named for the roofing material, the Bachelors Mosque, the Sultans Mosque. Then we will continue upwards to visit the Mangalemi quarter and the citadel which still has a living quarter within it. Visit Onufri Museum and several churches within the castle. Traditional lunch in a local restaurant within the castle (optimal). After lunch we will visit one of the most famous wineries in Albania for wine Degustation. Turn back to Tirana. Visit of main attractions in Tirana: Scanderbeg square, Ethem Bey Mosque, Palace of Culture, Tannes Bridge, Colorful Flats, Historical National Museum. Overnight in Tirana.
Duration: 8 hours

Stop At: Old Bazaar (Pazari i Vjeter), Rruga Albanopolis, Kruje 1501 Albania
After breakfast depart for the historic town of Kruja is located 32 km northwest of Tirana. The town of Kruja rises 560 meters above sea level, on the slopes of Sari -Salltiku Mountain. It provides to the visitors the great view of majestic landscape and a rich collection of historical and cultural objects. We will visit The Restored Castle and Citadel, Scanderbeg and Ethnographic Museum. Old Bazaar for souvenirs.
Duration: 4 hours

Stop At: Durres Amphitheatre, Rruga Kalase, Durres Albania
After lunch depart for Durres, the second largest city of Albania. It is the most ancient city and one of the most economically important as the biggest port city. The beaches of Durres are local hot spots for many Albanians and are an important part of tourism in Albania. We will visit city Walls, Amphitheater one of the largest in the Balkans, Ethnographic Museum  which is next to the amphitheater, in a historic house of the second half of the 19th century. Traditional costumes and other craft items from Durrës and its neighborhood are on display. Roman Thermal Bath, Archaeological Museum. Overnight in Tirana.
Duration: 4 minutes