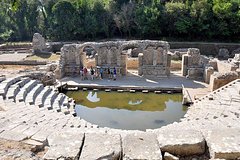 This trip will take you to one of the most amazing archeological sites on the Mediterranean. Butrinti archeological site was known during antiquity as the ancient Bouthrotos and part of it can be seen for Corfu island. Visit one of the least unspoiled corners of the Mediterranean as you walk through Butrinti ancient monuments. Soak up the atmosphere and the unique ecosystem of Butrinti as you visit some of its finest monuments such as the well preserved Greco-Roman Theatre built in honour of Asclepius, God of Medicine, Baptistry, Byzantine Basilica and the Museum inside the castle. Visit Butrinti day trip from Corfu can be done in one day starting from Corfu town at 9.00 AM and back via the Saranda Port. The journey from Corfu to Saranda take about 30 min. The tour starts in Saranda Port from where our local guide will transfer you to Butrinti Archeological Park.

Take a guided tour of the archeological site to see preserved monuments such as the Venetian tower, temple of Asclepius and Agora. Visit the remains of the Baptistery, Episcopal Palace and more. Hear how the settlement is believed to have been founded in the Bronze Age, and how it became an important trading post for merchants from Corfu.Explore the temple to the Ancient Greek god of medicine, and continue through the Ancient Roman period, when Caesar designated the city a colony to reward soldiers who had fought with him against Pompey. Move on to the Byzantine period, when the city became an episcopal center until it fell into decline under Venetian rule. Hear how it became part of the Metropolis of Ioannina under Ali Pasha Tepelena, and then head back to Saranda for the end of the tour services