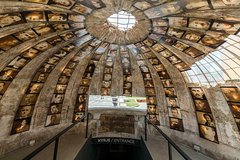 If you would like to know and better understand Albania and Albanians this is the case to learn how the 45 years long Communism regime has influenced the person, the society, and the hole country. Communism in Albania can be compared only with north Korea, totally isolated from the whole world.
During this tour, we will visit some different places from each other but on Communism, theme centered. Come and discover it step by step with us.

BunkArt 1 is a museum opened to the public in November 2014 in the direction of Linz, near Dajti Mountain. BunkArt is an anti-atomic bunker built around 1970 and was hidden to people. It has 5 floors and 106 rooms. They were designed to be used for these purposes: an apartment for dictator Enver Hoxha, an apartment for the prime minister, Mehmet Shehu and the rest for the army. Within the bunker, there was everything to provide a normal and long-lasting style of life, including the cultural and informational aspects of theater, television, radio and so on. The objects within it and the manner of shaping show much about the economic and cultural development of Albania in the communism period. BunkArt 1 was built to anticipate the danger that one day the regime would end and Albania as a small country has been constantly threatened by any possible invasion.

The building was known as the House of Leaves (so-called because of the clambering plant covering its facade) opened on 23rd of May 2017 and it is the newest museum in Albania and certainly the most intriguing one that tries to narrate to young people and to foreigners, one of the darkest periods of the countrys history. This monument was built in 1931 and The House of Leaves was a maternity hospital at the beginning It was covered for a long time with all sorts of legends and it comprised the unknown a mystery. Whispers of people and rustling of leaves.
During the early postwar years, the House of Leaves was used as an investigation center, thus also as a place where tortures were made. The practice of tortures and other terror forms was accepted also by the official communist propaganda. Now it has returned to the Museum of Secret Surveillance. This monument was built in 1931 and a maternity hospital in the beginning. Inside it, there are 31 grouped rooms in 9 different functioning sections. The Ministry of Tourism and Environment the House of Leaves a cultural monument of the 2nd category called "Laboratory of Criminology.

After the visit to the House of Leaves, we will proceed walking toward the Block area (Albanian: Blloku) for a few minutes. This is a central area in the city, which during the communist period it was a restricted residential area for the members of the Albanian politburo (government), ordinary Albanians would not be allowed in. Here we are going to visit the residence of Albanias communist leader Enver Hoxha.
Nowadays it is widely known as an entertainment destination with its boutiques, shops, restaurants, trendy bars, pubs, and cafes.

On 14 October 1988, the structure opened as the Enver Hoxha Museum, originally serving as a museum about the legacy of Enver Hoxha, the long-time leader of Communist Albania, who had died three years earlier. The Pyramid has sometimes been sardonically called the "Enver Hoxha Mausoleum", although this was never its intended use or official appellation. After the Communism period, the pyramid ceased its function as a museum and for several years was repurposed as a conference center and exhibition venue.
The Pyramid is placed in the main promenade between the city center, Skanderbeg square and Mother Teresa square close to Polytechnic University. During this walk, we will show you the main government buildings which are the same ones used during Communism Regime.

We would like to end up this tour in the best way, with a coffee break in a unique stylish bar. Styled as a cafe-museum, this little bohemian place looks like a flea market. Every spare centimeter is crammed with communist-era relics, farming implements, Japanese fans, old clocks and so on. It's certainly a memorable spot for a coffee or one of 25 varieties of raki, the local fruit-based spirit.