Day Tour of Shkodra from Tirana 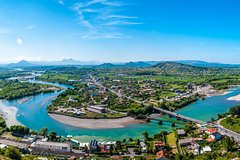 Day Tour of Shkodra from Tirana

Summary of day tour of Shkoder from Tirana

Shkodra city is situated in the North Western part of Albania, giving its name to the biggest lake in the Balkans. The oldest wall of the Shkodër castle dates from the 1st millennium BCE. The Roman historian Livy cited the town as the capital of the Illyrian king Gent, who fought the Romans in 168 BCE. We will visit Rozafa castle offering tremendous scenery of the lake and the three rivers melting all together in the Adriatic Sea. The citys architecture is highly influenced by the Venetian style, and if you are lucky enough to join the tour of Shkodra in February you might experience the carnival festival. Most of the guests are surprised to learn that most of the Venetian masks are handmade and produced in Shkoder. The citys favourable geographic position has always been an important trading tie through the centuries, making it possible for different civilisations to encounter.

The castle is located at the entry of Shkodra city