Daytrip to Berat from Tirana 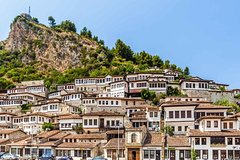 Daytrip to Berat from Tirana

Have real experience of the local culture. Lunch is a unique affair in a traditional house within the castle run by a local couple. This is the absolute possibility to experience Albanian home cooking and is not to be missed. After visits and optional lunch at the castle with homemade specialities we make our way down to the old district of Mangalem where we will visit the Kings Mosque and Helveti Tekke next to each other. Religious monuments of different faiths stand together demonstrating the religious tolerance of Albanians. On the way back to Tirana we stop at a local winery run by a family from Berat, where we can sample one of the best Albanian wines.

The castle is the only one in Albania that still has houses and inhabitants within its walls, going about their daily life in exactly the same place their predecessors did centuries ago. We will visit the Castle, St Marys Church turned Onufri Museum which houses an amazingly diverse collection of Icons and two other churches not open to the public. Onufri whose name has been given to this Icon museum was an Albanian master painter of the 16th century who painted many church icons in Albania and Greece and is famous for its red colour named after him. Berat is also famous, as two of the oldest bibles New Testaments one from 6th century and one from 9th century AD have been found here. Lunch is a unique affair in a traditional house within the castle run by a local couple. This is the absolute possibility to experience Albanian home cooking and is not to be missed.

Berat, a UNESCO World Heritage Site. Being more than 2400 year old, the town it is one of the most attractive towns in Albania. Established in the 3rd century B.C by an Illyrian tribe of central Albania with a protective castle, it was known as the fortified city of Antipatrea. In 1417 the town was occupied by the Ottoman who built quite a few mosques in the area below the towns old castle. Berat is situated at the foot of Tomorri Mountain and on the shores of Osum River. Built in white on a slope of green with the river at its feet, it offers a striking view as soon as it becomes visible. It is famous for its white-washed houses with their many windows which seem to have been built on top of each other, that give it the nickname town of a thousand windows. It retains a unique style of architecture, with narrow and stone paved streets.