Durres and Cape of Rodon in a Day-Tour from Tirana 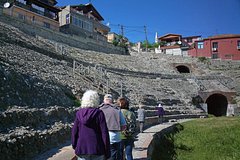 Durres and Cape of Rodon in a Day-Tour from Tirana

Choosing this tour, you will choose to spend a full day exploring one of the main cities of Albania, the ancient town of Durrah (Actual: Durres), and sightseeing some cultural and historical sites in the middle of nature, close to Rodon Cape.
During the first part of the day, you will have the chance to visit, on a walking tour, the ancient city of Durrah, the Amphitheater, the Venetian Tower, and the Archaeological National Museum.
After a relaxing moment of a coffee-break with a panoramic view of the city promenade, we will head back on the way toward the Cape of Rodon on the Albanian coast between Durres and Tirana. More than the historical and cultural part with the visit of the St. Anthony Church and Skanderbeg castle, worth it for the fantastic nature, the fresh air, the panoramic view. Cape of Rodon, with its attraction, is one of the unbeaten paths still to get explored and just in a few minutes from Tirana or Durres. Do not miss it if you want to feel Albania in a few hours.

The first destination we will visit will be the Durres Amphitheater, built in the early 2nd century AD during the reign of Emperor Trajan and proclaimed a Cultural Monument in 1973. This amphitheater has elliptical Roman architecture and is located in the center of the city, 350 m from the sea. Its capacity of 15000 spectators is the only one of its kind in Albania, but also one of the largest in the ancient world. So far, only half of the monument is represented by the staircase, galleries, and two menus. Visiting the Amphitheater, we will see the Chapel, which was built in the first half of the 5th century. Also, on the walls of the chapel, we will have the opportunity to get acquainted with the only parietal mosaic preserved in Albania.
On the south panel, we are in front of the royal figure of St. Mary, surrounded by divine characters: angels and other servants. In the meantime, we observe the stairs (kavea), which go on beam paths to the arena and serve to facilitate viewer movement. Behind this is a small shrine or mortuary chapel, and two tombs (columbarium) are built, occupying the first two galleries of the gallery.

The visit includes a walk around the castle walls and an overview from the rooftop point of one of the towers. This castle is a city fortress build from an Albanian origin Byzantine Emperor Anastasius in the late 5th century. The castle was reinforced with several guard towers by the Republic of Venice and during the period of rule in Albania by the Ottoman Empire, the wall was reinforced.

Durres Amphitheater, or about 1 hour, we head to the Archaeological Museum.
The Archaeological Museum, inaugurated on April 13, 2002, based on the materials of the First Archaeological Museum, opened on March 13, 1951. In the museum, we see about 2,000 archaeological objects emerging from the city's underground. The exhibition is organized in three pavilions according to historical periods. In chronological order, we can trace the history of the town in the archaic, classical, and Illyrian period until the 1st century BC. to continue with the topographical, economic, political, and cultural development of Durres in the Roman period. At the entrance of the left-wing, we observe the Illyrian and ancient Greek periods in its three phases. In the frontal area, beyond the archaeological finds of considerable size that are located in the center of the museum, the Roman period begins. Meanwhile, on the second floor is planned the medieval period, and on the third floor is thought to build Islamic art pavilion. In the courtyard, we face communist-era artifacts, most notably a statue of Stalin.
After being acquainted with the Archaeological Museum for about 1 hour, we can spend 30 minutes of free time-consuming something or overlooking the coast of Durres.

At around 11:30, we depart toward Rodon Cape, which is a peninsula-shaped strip of land that runs into the Adriatic Sea. It lies in the form of a triangle between the bay of Rodon in the north and the bay of Lalzi in the south. Here we will offer not only culture and history but also beaches and nature.
St. Ndou Church
Around 1 pm, as soon as we reach the place, we will visit the Church of Saint Anthony. This monument belongs to the Romantic-Gothic architecture of the XIV century. What we notice is that the church has a rectangular layout and consists of the narthex, the nave, and the altar. The connection between the narthex and the naos was initially made with a comprehensive introduction but is now narrower. Also, a sharp bow separates the naos from the altar. Naos has been covered with wooden roofs, while the platform has been stained.

The next destination is Rodon's Castle (Skanderbeg Castle), which was built by Skanderbeg during the 14 century. We will walk for a few minutes to reach the castle, which is just close to the seashore.
Redon Castle was a fortification consisting of a 100 m long protective wall extending from one peninsula to the other. On the north-east side, the wall was provided with an entryway for communication. Adjacent to this entrance was an arched bastion that extended parallel to the shore. Another second wall in parallel accompanied the Bastion wall. At either end of the wall, the wall and the bastion were fitted with towers.
Interestingly, even today, we can see in their ruins, the fringes of cannonballs. A third tower was located 200 m inside the cape. The castle was erected by Skanderbeg for a cruise not being subordinate to Venice and served to communicate by air in fires with the Kruja fortress.
After this beautiful experience, we depart toward Tirana for about 1 hour and 30 minutes.