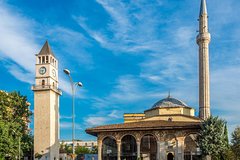 This six days tour program is tailored to offer its participants the best combination of historical sites of Central Albania, with some of the best national parks of this Balkan country. During these days you will be able to visit the most important tourist attractions of Albania including one UNESCO site, Berat.

Stop At: Skanderbeg Square, At the center of Tirana, Tirana Albania
Our professional tour guide will pick you up at Tirana International Airport and transfer you to your hotel in Tirana. Right after the group gets together we start our journey. Tirana, the capital of Albania would be our destination for the day, where we have brief city tour. Colourful, lively, vibrant, dynamic, 24/7 and crazy nightlife, these are some of the words that better describe this city where the communist and capitalist-era buildings battle on daily basis. Not to be missed is Tiranas delicious food varieties, from the tasty and cheap street food to the finest gourmet options Overnight in Tirana.
Duration: 1 day

Stop At: Dajti Ekspres Cable Car, Tirana Albania
After breakfast we see more of Tirana; a great combination of very interesting museums, historic sites, national parks and mountains, ottoman, Italian and communist style architecture all clashing between each other, offering however a great pleasure to wander. Our tour would continue towards Mount Dajti, a National Park next to Tirana, also considered by many as the balcony of the city. We will take the cable car to the mountain and enjoy lunch with an astonishing view.
Duration: 4 hours

Stop At: Bunk'Art 1, Rruga Fadil Deliu, Tirana 1001 Albania
On our way back we will visit Bunk Art (one of the most visited tourist attractions in Tirana). Built during the cold war by the communist regime, this huge nuclear bunker was unknown to the general public until 2015. Nowadays it serves as history museum of Albania during the 19-20th century. Overnight in Tirana.
Duration: 3 hours

Stop At: Berat Castle, Rruga Mihal Komnena, Berat 5001 Albania
Our next destination is Berat, also known as the 1001 windows city, part of UNESCO world heritage. Walking through the narrowed stone streets offers a fantastic view of the medieval old houses, with windows that seem to stand above each other. Berat has it all; a beautiful medieval castle, ancient churches and mosques, a lively lower town consisting of grand old houses draped on steep hillsides, an old stone bridge, great museums and remains from the communism era in Albania. Berat is also known as the birthplace of Onufri, the famous churches painter all-over the Balkans, distinguished for creating a specific reddish colour still difficult to imitate. Overnight Berat.
Duration: 1 day

Stop At: Kruja Castle, Near Tirana, Kruje 1501 Albania
Kruja is an historical city symbol of the Albanian resistance against the expansion of Ottoman Empire. Kruja is situated in central Albania on a rocky mountainous terrain about 560 meters above sea level, on the slopes of Sari -Salltiku Mountain. Walking through Krujas Medieval Old Bazar (one of the biggest and oldest in Balkans) gives you a sense of a passage through the history. You would be surrounded by crafts and local products carefully designed by local artisans and housewives of Kruja area. The castle of Kruja (built during the 5th century AD) is strategically placed on the top of a rocky hill, making it difficult for the enemies to attack. Our local guide will take you through some hidden paths, used by the locals to leave the castle without being noticed, during periods when the enemies surrounded the castle. Overnight Kruja.
Duration: 1 day

Stop At: Durres Amphitheatre, Rruga Kalase, Durres Albania
We head to the ancient town of Durres to explore the amphitheatre, the Roman ruins and the Venetian Tower. Founded as Epidamnos in the ancient region of Illyria in 627 BC by ancient Greeks, Durrës has been one of the most important cities in the history of Albania. Known also as the centre of Archaeology in Albania, but not only it has the largest Ancient Roman style Amphitheatre. The Geographic position lied in the shores of Adriatik Sea, turns Durrës into the main port and the second largest city of Albania as well. Overnight by the seaside in Durres.
Duration: 1 day

Stop At: Kepi I Rodonit, Draç, Albania
The hilly peninsula of Cape of Rodoni is one of the most intact and tranquil sections of the Albanian Coast, with an alluring position overlooking the Adriatic Sea. Inland this cape is lied the secret Castle of Scanderbeg, the Albanian national and the church when he was married. The fuse of the rocky, hilly terrain with clear deep blue waters and two of the main castles in the defensive chain of the 16-century makes this tour unique and unrepeatable. The transfer to Tirana International Airport marks the end of this amazing experience through history and adventure.
Duration: 8 hours