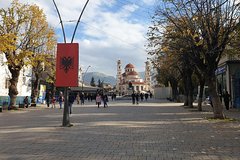 Wander around the streets of the little Paris of Albania, visit the National Park of Drilon, admire the beauty of Ohrid Lake (UNESCO), wander through an ancient village and taste its traditional dish on this three-day tour of Pogradec, Korça and Voskopoja. These two Albanian cities have stunning national parks and historical sites, while the village has just as much to offer.

Pass By: Choose Balkans - Albania Tour Operator, Rruga Reshit Çollaku, Tirana, Albania
At 9:00 am in the morning, our tour guide will come and pick you up at your hotel.

Stop At: Pogradec, Pogradec, Korce County
Our first destination for today will be Pogradec. Situated in the shores of Ohrid Lake, Pogradec is one of the oldest settled civilizations in Albania. Ohrid lake, of tectonic origin (2  4 million years old), is the deepest lake in Balkans and it is under UNESCO protection due to its unique value and being home to 17 species of aquatic animals.
Duration: 2 hours

Stop At: Lin, Lin, Korce County
As we drive through the elaborated zigzags, we encounter the tremendous scenery offering one of the most picturesque views of Lake Ohrid and Lin Peninsula. In addition to the enchanting views, we will discover the mosaic of Lin, dating back to 4th-5th centuries A.D. This ancient artwork exhibits an amazing ensemble of zoomorphic, floral, and geometric decorations resembling those in ancient Durrës. Lin has also been described as the favorite holiday destination of the parents of the Roman Emperor Justinian.
At 12:30, you will get some free time on both days of the tour to enjoy a delicious lunch and wander around by yourself until 14:00 pm.
Duration: 2 hours

Stop At: Drilon, Drilon, Korce County
After lunch, we will visit the national park of Drilon and Tushemisht. Drilon waters form a small lake, surrounded by beautiful greenery that makes the area and the nearby village of Tushemisht a unique oasis of beauty and tranquility. The area is also famous for its culinary wonders, such as the traditional fish dishes, especially the baked speckled trout (Koran in Albanian) as well as the famous pickles. You might also taste the various wines on offer, but dont miss the traditional unique wine of Buti, or the famous Perla and Moskat raki of Pogradec.
Duration: 2 hours

No meals included on this day.
Accommodation included: Overnight in Pogradec.

Stop At: Monastery of Saint Naum, Ohrid Republic of North Macedonia
Only 30 min walking from Pogradec is St Naum (N. Macedonia). We will park the car at the cross boarder of Albania and North Macedonia. The monastery of St Naum is also known as Sveti Naum where you can find stunning nature as well as religious heritage.
Duration: 1 hour

Stop At: Voskopoje, Voskopoje, Korce County
Our next destination will be Voskopoja. This village, formerly known as Moskopoje, became one of the most developed and prosperous cities in the European part of the Ottoman Empire between the 17 and 18th century. Voskopoja is located in quite an isolated place in the mountains in the south of Albania. Yet, it used to be the second most important city of the Balkans in the 18th century, looking at the population and how it flourished. Voskopja nowadays does have many art works, but only 8 of the original 24 churches are still standing. So, it is just a small mountain village but definitely worth a visit with all its history, nature and not to mention the traditional dish called Lakror (pie baked in ashes)! You will also get the chance to go for a walk through the beautiful nature.
Duration: 4 hours

Stop At: Korce, Korce, Korce County
We will continue our tour towards Korça in the southeastern region of Albania, one of the most beautiful and important cities of the country. Because of its beauty, French-style villas and coffee culture, Korça is also called the little Paris of Albania.
Duration: 2 hours

Stop At: Korca Old Bazaar, Rrugica Piro Lena, Korce 7001 Albania
We will take a city tour of this lovely enchanting town. Not to be missed Pazari i Vjetër, the most charming neighborhood in Korça and an area that looks like it was pulled straight from a fairy tale; narrow streets, colored buildings, nice cafés and small boutiques can be found everywhere you look.
Duration: 2 hours

Stop At: National Museum of Medieval Art, Rr. Sotir Peci No.2, Korce Albania
After lunch, we will visit the largest orthodox church of Albania which is known as the Cathedral of the Resurrection. This church was built after the communist regime ended in Albania. In this exact spot there used to be another church, but it was destroyed during communism. The new church is now the symbol of Korça. Another interesting fact is that the first Albanian school was founded in Korça. We will visit the National Museum of Medieval Art where you will have a closer view to many cultural items.
For the beer lovers among us, Korça can offer you the best beer of Albania as well! We will be back in Tirana in the late afternoon.
Duration: 2 hours