Explore and Feel Tirana in a Walking Tour 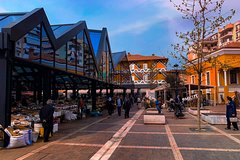 Explore and Feel Tirana in a Walking Tour

This guided tour aims to show you the highlights of Tirana, the capital of Albania, the most controversial city you have ever visited. A city where nowadays use to live one-third of the population; a mix of culture between north and south Albania. A city with ottoman, Italian and Albanian Communism regime influences. A modern city, similar to a European one and very different from all the other cities around Albania.
Our tour offers the most completed and long list of attractions to provide for you a local experience and make you feel this city in every step.
Historical sites, monuments, sightseeing, cultural - heritage, regime museum and moreover from what listed in this tour description. We are open to adapt it to your request and available time you might have. We would like to show you the other Albania, which stands after these attractions.

This tour will start with the visit to our National History Museum to have a short presentation with the origin of Albanians and their history.
The National History Museum is the largest and most important museum in Albania because it holds the historical facts and cultural heritage of the Albanians of the fourth millennium BC until the second half of the 20th century. It was opened to the public on 28 October 1981 in Skanderbeg Square. About 5000 exhibited objects in a 18000m2 space provide curious visitors the past assets and evidence of our country. The museum is divided into eight pavilions: the Pavillion of Antiquity, the Pavillion of the Middle Ages, The Renaissance Pavilion, The Pavilion of Independence, the Albanian Iconography, the Anti-Fascist, The Pavilion of the Communist Terror and Mother Teresa.

Pass By: Skanderbeg Square, At the center of Tirana, Tirana Albania

After the meeting in front of the Museum, and its visit, we will walk through the main square, Skanderbeg Square with its statue right in the center of the square, and do a presentation of the main buildings around this city center square.

The Clock Tower of Tirana was built in 1822 and it is a monument of culture of the first category, approved on 24 May 1948. It is located in the center of Tirana and it the emblem's symbol of the Tirana Municipality.
The clock has been in constant change and originally it had a bell from Venice that marked the time every hour but later was replaced in 1928 with a new clock purchased in Germany. This showed the time to citizens until 1946 when a clock was set by the church of Shkodra and in 1970 it was replaced by the actual Chinese clock.
You can enjoy a panoramic view of the city center from its top.

The Mosque of Et'hem Bey has been a first-category culture monument since 1948. Architecture is the oriental Islamic one, with the only difference being that the frescoes reflect the view of the quiet nature which is not the case in Islamic frescos. At the end of the cube are written the 99 names of Allah. The mosque contains 18 windows. There is a large wooden mimble in which women pray.
During the communist era, Albania was declared an atheist place and many churches and mosques were destroyed but luckily the Mosque of Et'hem Bey remained unharmed. On January 18, 1991, around 10000 people entered the mosque and had the courage to re-establish religious beliefs.

Bunk-art 2 is the second anti-atomic bunker museum opened in November 2016 in the center of Tirana. This is an interesting place to see and understand the local context, the communism history, and its consequences.
Bunk-art 2 reconstructs the history of the Albanian Ministry of Internal Affairs from 1912 to 1991 and reveals the secrets of Sigurimi, the political police that was the harsh persecution weapon used by the regime of Enver Hoxha in which thousands of the files of persecutions were hidden.

The building was known as the House of Leaves (so-called because of the clambering plant covering its facade) opened on 23rd of May 2017 is the most intriguing one that tries to narrate to young people and foreigners, one of the darkest periods of the countrys history. This monument was built in 1931 and The House of Leaves was a maternity hospital at the beginning It was covered for a long time with all sorts of legends and it comprised the unknown a mystery. Whispers of people and rustling of leaves.
During the early postwar years, the House of Leaves was used as an investigation center, thus also as a place where tortures were made. The practice of tortures and other terror forms was accepted also by the official communist propaganda. Now it has returned to the Museum of Secret Surveillance. Inside it, there are 31 grouped rooms in 9 different functioning sections. The Ministry of Tourism and Environment the House of Leaves a cultural monument of the 2nd category called "Laboratory of Criminology.

Ish-Blloku (English: Ex-Block), commonly Blloku (English: Block), is an upmarket area in Tirana, Albania. It is widely known as an entertainment destination with its boutiques, shops, restaurants, trendy bars, pubs, and cafes. It became very attractive after the fall of Communism in Albania because during the communist period it was a restricted residential area for the members of the Albanian politburo, ordinary Albanians would not be allowed in.
In Blloku you can still find the residence of Albanias communist leader Enver Hoxha, which we will going to have a look inside.
After this short walk in Bllok area, on the way toward Tanner's Bridge, we may stop for a short break (optional) at a unique coffee - bar and museum called "Komiteti - Kafe Muzeum", which will give you a feel of what Albania was around 40 years ago. You can have a Turkish coffee, a huge variety of flavored brandy or a piece of cake.

In our walk to the next attraction, we will pass by a corner with 3 bunkers, a part of the Berlin wall and some concrete from a communist camp. all these placed in a well designed and kept garden, close to the main government buildings.

The Peace Bell is located in Boulevard Bajram Curri, near Piramida since 01.01.2000. It is a monument to martyrs lost in 1997 when Albania lost control of the state and was subjected to the terror of the gangs that took possession of the weapons and the money of the Albanians through pyramid schemes. It was made from about 20,000 shell casings collected by the children of the Zadrimes Catholic Community. The idea for the realization of this monument was of Don Antonio Sciara, with the support of former President Rexhep Mejdani and former Minister of Culture Edi Rama.

Tanners Bridge is a monument that evidences the development of architecture, commerce, craftsmanship and the importance that inhabitants gave to the communication between the various areas within the city in the eighteenth century. The road connected Tirana with the eastern highlands and was mainly used by farming caravans to bring produce and livestock into the city.
The bridge was in use across the Lanë stream to the other until the 1930s but later it was diverted from its previous course where it fell into disrepair till the 1990s when the bridge was fully restored. It has the shape of a 2.5m width and an 8m length stone arch.

Stop At: Fortress of Justinian, Rr. Murat Toptani, next to Parliament, Tirana Albania

Fortress of Justinian or simply known as Tirana Castle is a castle in Tirana, Albania. Its history dates back before 1300 and is a remnant from the Byzantine-era. The fortress is the place where the main east-west and north-south roads crossed, and formed the heart of Tirana. Inside the fortified walls of the former fortress, there are many buildings that can be visited, including restaurants, hotels, and cultural institutions.[1]
About all that is left of the fortress above ground is a 6-metre (20 ft) high Ottoman-era wall, covered in vines. The recently uncovered wall foundations were incorporated into the pedestrianised Murat Toptani Street, while a mosaic commemorating the 100th Anniversary of Albania's Independence was unveiled near the Albanian Parliament.[2]
The Castle of Tirana was declared a monument of culture of first category on 10 June 1973 and the new tracks of walls of Tirana Castle were declared a cultural monument on 15 May 2008.

The New Bazaar was established in 1939 and through the following years it kept on prospering and developing. Its establishment came as a necessity, due to the continuous increase of the trade activity which could not be afforded any longer by the only Old Bazaar. After the demolition of the old Bazaar in 1959, the new Bazaar remained for a long time the only trading center of meat, fish, vegetables, and fruits in Tirana. The New Bazaar is located in one of the oldest areas of the city. Even today, it continues to be one of the largest markets for meat, fish, vegetables and fruit trade in the town. It's a space that operates 24 hours, with the biggest focus on product trade in the morning hours and on culinary issues in the afternoon for the restaurants around and the development of artistic and cultural activities such as festivals, fairs, etc

Here will be the end of our tour. You can profit to have your lunch or dinner in one of the restaurants in the area.