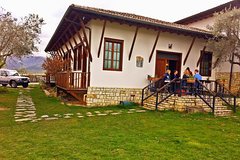 Visit the Ottoman city of Berat on a full-day trip from Tirana that includes pickup and drop-off in a central location and a guided tour of Berats historic castle. See a historic center thats been named a UNESCO World Heritage Site, and get a glimpse of Albania at its most picturesque.

Make your way to a centrally-located point in Tirana, where you'll meet a guide and group for the trip to Berat in an air conditioned vehicle. Upon arrival in the city, youll see a fascinating blend of architectural styles that tell the story of Berats diverse religious and cultural communities. In the lower part of the city, spot some of the distinctive tiered houses climbing the steep hillside.

Head to high promontory overlooking the city to explore the castle, or kala, which was fortified in the 5th century after the Romans burned it down in 200 BC. Take in some of the Byzantine churches and Ottoman mosques that are protected by the castle walls, and snap panoramic photos from the historic battlements.

After exploring Berat, begin the return trip to Tirana, where this tour concludes with drop-off at your original departure point.