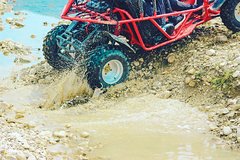 When people speak of touring in Europe, all the familiar countries come to mind. There is one European country however, that is still considered thoroughly untouristed, and it is Albania. Nestled between northern Greece and the azure waters of Italy, Albania should be a tourist mecca. With a fascinating history, natural beauty, to-die-for Mediterranean cuisine, and a bundle of eccentricity, Shqipëri, as Albania is known in its native tongue, is Europes unpolished diamond.
From mountain top shrines to secluded monasteries, spiritual sites are places where pilgrims seek miracles while travelers see wonders. Spiritual Albania is rich in traditions, sacred places, and pilgrimage sites. Those places are at the same time great tourist attractions due to their historic and cultural values. You can visit these popular destinations of various faiths and find spiritual ways to experience Albania. What is the best way to combine spirituality with adrenaline?
The answer is BUGGY MOTORS

Gjirokastër Castle (Albanian: Kalaja e Gjirokastrës or Kalaja e Argjirosë) is a fortress in Gjirokastër, Albania (during Ottoman rule it was historically known as Ergiri while local Greeks referred to it as Argyrokastro, a name applied also to the castle). Gjirokastër Castle is situated at a height of 336 metres (1,102 ft).
The castle dominates the town and overlooks the strategically important route along the river valley. It is open to visitors and contains a military museum featuring captured artillery and memorabilia of the Communist resistance against German occupation, as well as a captured United States Air Force plane to commemorate the Communist regime's struggle against the "imperialist" western powers.

The mosque was built in 1757 and is located in the Old Bazaar neighbourhood. It is one of fifteen mosques originally built in the city during the Ottoman era, of which thirteen survived till the communist period.
The mosque was originally designed to be located in the New Bazaar neighbourhood of Gjirokastër, as part of Memi Pasha's urban plan, that was built in the 17th century. It was, however, destroyed by fire in the following century, with the exception of the mosque.
The mosque was elevated to "Cultural Monument" (Monumente Kulturore) status by the Albanian government in 1973, sparing its destruction by the totalitarian communist regime of Albania. The remaining twelve mosques were subsequently demolished. Because of a religion ban in Albania, the mosque was used as a training hall for circus acrobats who made use of the high domed ceilings to hang their trapezes.

In the shadow of the mid-18th-century Bazaar Mosque, the Gjirokastër Bazaar is known for handmade wood pieces, handwoven rugs and artisanal crafts such as delicate lace items. Nearby cafés selling pastries offer a nice break from negotiating the steep ups and downs of the stone streets.

Skender Skenduli, another wealthy land owner, built the Skendulate House (22) in 1823 during Gjirokastras greatest period. The house had two courtyards and is unique in having both an internal and external staircase. It used to have 46 chimneys, indicating the wealth of the Skënduli family. The main guest room (oda), in particular, is distinguished by its decorated ceiling and wooden poles, just as the many other wooden decorations throughout this house give it an unrepeatable value. The great number of loopholes and the sophisticated locks of the main doors bear witness of its defensive function.
It is open for visitors; there are not yet exact times of opening hours. A family member will appear always to guide you inside

Kadare House is the newest attractions in the historic city. It belongs to the family of Ismail Kadare who was born here in 1936. Ismail Kadare is the most well known Albanian writer internationally. Destroyed by fire in 1997, the house is now being fully reconstructed and offers several of exhibitions mostly related with the figure of the writer.
Opening hours from April to October from 09.00-19.00

The best surviving example of an ottoman tower house in Gjirokastra
The fortified tower houses  known as kullë (kullë is Turkish for tower) belonged to wealthy individuals such as administrative officials or merchants. They all follow a basic layout: a secure stone lower storey topped by a wooden gallery where the principal rooms for an extended family are located. Embrasures are set in the walls to help defend against attacking enemies. The Zekate House is a particularly grand example of the typical kullë (tower-house). Constructed in 1811-1812 it has twin towers and a great double arched façade. The views of the town and the river valley below are spectacular.

The ethnographic museum is situated in the Palorto Quarter, which is the best preserved district in the old town of Gjirokastra. The Ethnographic Museum stands on the site of the home of Enver Hoxha, communist dictator of Albania from 1944 to 1985. The museum building was constructed in 1966 after the original house was destroyed by fire. The reconstruction was designed as a model traditional Gjirokastra house with many classic features known to have been copied from particular houses around the city. From 1966 to 1991 the building served as the Anti-Fascist Museum. In 1991 the exhibits from the previous Ethnographic Museum were moved into this space. The house has four floors, all of which are open to the public.

The beautiful service of consecration of the new Resurrection of Christ Cathedral in Gjirokastra took place on Sunday, August 7, 2016 according to the specific Church order (tipikon). The consecration service, as well as the Divine Liturgy that followed were celebrated by His Beatitude Anastasios, Archbishop of Tirana, Durres and All Albania, His Grace Dimitrios, Bishop and Metropolitan of the Metropolis of Gjirokastra, and His Grace Nathaniel, Metropolitan of Amantias.
From early morning, hundreds of Orthodox believers from the city and the surroundings, together with their parish priests, joined in prayer at such a unique moment for the local Church and the city of Gjirokastra. In particular youth and children gave this day a festive tone that will long remain in the memory of the Orthodox flock.

Gjirokastra's most interesting sight in no way relates to traditional architecture, but instead to a far more modern kind: this is a giant bunker built deep under the castle for use by the local authorities during the full-scale invasion that communist leader Enver Hoxha was so paranoid about. Built in secret during the 1960s, it has 80 rooms, its existence remained unknown to locals until the 1990s. Personal guided tours run from the tourist information booth on the main square all day.

The Babameto House is an elegant 2 stores house situated in the very heart of the Bazaar. In fact it is composed of two buildings, dated 1885 and 1887, housing separate branches of one family. The outside symmetry is not repeated inside, hinting at western ideas, with less emphasis on collective living. After 10 years of dereliction the building is restored in 2013. Open for the public, it is used as a good example of revitalization and modern use of a typical Gjirokastra house. Babameto serves as a Centre for Culture and Heritage, housing culture and tourist events, as well as an accommodation facility and a hostel. The property is under the administration the the Gjirokastra Foundation

DescriptionThe Church of the Dormition of the Theotokos, simply known as Koimissi or Saint Mary church is an Eastern Orthodox Christian church in the village of Labovë e Kryqit, in Gjirokastër County, southern Albania. It is one of the most representative examples of Byzantine architecture in Albania.

This monument, known as Mëmëdheu ABC, pays tribute to Albanian education in the 20th century. There are breathtaking views of the city from the Obelisk, especially of the old town districts of Varosh (below), Palorto (on the hill toward the right) and Dunavat (higher on the hill toward the left). The Obelisk is adjacent to the area in which the first Albanian school opened in Gjirokastra in 1908. Under the Ottoman occupation Albanians were not permitted to have their own schools, and so this was a very dangerous enterprise at the time for the teachers who dared to work there. This is also where one of the most remarkable sons of this city, Eqerem Çabej, used to live. Today the building houses the Gjirokastra Conservation and Development Organisation.