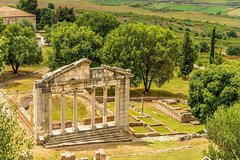 Wander the ruins of ancient significance at Apollonia. Founded first by the Taulanti Albanians, and then by the Greek colonists in 588 BCE, the city was founded again in the 18th century. International teams continue to excavate antiquities from the attraction's grounds, including a large collection of Roman statuary. Emperor Augustus himself studied in the ancient city. In fact, the town thrived under Roman rule and Cicero mentioned it as a great city in his writings. After its devastation by an earthquake, the city is making a comeback as a major tourist attraction. A Byzantine monastery with a rustic interior is also on site, and you are welcome to tour the inside. Purchase tickets at the museum, which serves as your introduction to the site's history. There is a lot of ground to cover, so wear comfortable shoes. There are facilities inside the museum.

The ancient city of Apollonia is situated in southwestern Albania, about 13 miles from the city of Fier. The fascinating landscape of the archeological park, which has been preserved in an exceptionally intact condition, comprises a successful combination between the beauty of monuments and nature, attractive through its long history, in an atmosphere of relaxation and meditation. Its foundation took place immediately after the foundation of Epidamnus  Dyrrachium and quickly became one of the most eminent cities of the Adriatic basin, which was mentioned more frequently from the other 30 (thirty) cities bearing the same name during Antiquity. The city lay in the territory of the political communion of the Taulantii and was broadly known as Apollonia of Illyria. According to the tradition it was founded during the first half of the 6th century BC by Greek colonist from Corfu and Corinth, led by Gylax, which named the city after his name (Gylakeia). After its quick establishment the city changed its name to Apollonia, according to the powerful divinity Apollo. It stands on a hilly plateau from where expands the fertile plain of Musacchia with the Adriatic Sea and the hills of Mallakastra. The ruins of Apollonia are discovered in the beginning of the 19th century.