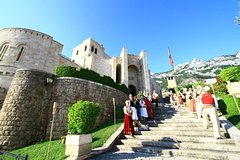  Our Tour is unique, because you will be acquainted and you will see the highlights of Kruja and Preza castle ,which were the center of the struggle against the Ottoman Empire in the 15th century, led by national hero Skanderberg. Today, the Kruja castle is home to the National Skanderberg Museum, remains of the Fatih Sultan Mehmed Mosque, an ethnographic museum, a Turkish bath and a reconstructed bazaar. It also offers scenic views of the surrounding area .After you will continue your tour to Durres.There we will enjoy, the beautiful beaches of Adriatik Sea , so you will create a complete idea of Albanian relief by strolling from the hills of Kruja to the coast of Durres.There we will walk along the beach boulevard, soaking up the fresh air of the Sea .After we will have a seafood lunch, in one of the best restaurants by the sea

This castle tour is for those who are interested in history, culture, tradition,heritage of Albania. Kruja and Durres are chosen on purpose to let you know a lot about the above mentioned things mainly the resistance of our people against the Ottoman invasion

8.30 am The Hotel is the meeting point with our guide
8.35 am Departure to the town of Kruja to see Kruja castle within which is the museum of national hero Gjergj Kastriot Scanderbeu.
10.30 am .Visit to Kruja Castle
The Krujë castle is a castle in the city of Krujë, and the center of Skanderbeg's rebellion against the Ottoman Empire
We will visit Inside the castle the Museum of Scanderbeg, the Teqe of Dollme of the Bektashi (an Islamic Sufi sect), also we will visit the remains of the Fatih Sultan Mehmed mosque and its minaret, an ethnographic museum and a Turkish bath.(2 hours)
12.30 Visit to the old Bazaar of Kruja one of the oldest Balkans (30 minutes)
13.00 Departure to the Durres. There we will enjoy, the beauties of Dura's beach, stroll along the beach boulevard, sucking in the fresh air of the Adriatic Sea. We will have a seafood lunch at one of the best restaurants by the sea( 3 hours )
16.00 Return to Tirana and to your hotel (1 hour)

A visit to Preza castle The Prezë Castle is a medieval castle in Prezë, Albania. Preza Castle overlooks the village with the same name and is located on a hilltop. It is a small castle the construction of which started in the 14th century and was completed in the early 15th century and belonged to the Thopias, a local feudal family.

There we will see, the beautiful beaches of Durres, we will stroll along the beach boulevard, soaking up the fresh air of the Adriatic Sea and you will create an idea of Durres beach and sea. We will have a seafood lunch, in one of the best restaurants by the sea there