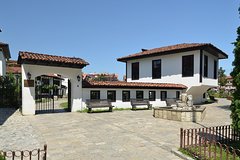 Famous for its unique style and culture, Prizren is one of the most important cities in the History of Kosovo. It is the city where the Ancient History get fused with Medieval times, Ottoman invasion and plenty of Balkans wars.

Lied in the both sides of Lumbardhi River (White River) and above the Prizrenis castle this Noble city is the place when different ethnics and religions are living in harmony with each other from centuries. Prizren is the city that everyone falls in love with !

The tour starts at 8:00 am where after the hotel pick up, we will head toward the Morinas Border. Along the way, you will be able to spot the differences in rural life in Albania.
Still vivid are the footprints of the Communist regime and the former Industrial Cities build during that period.

Once we get to Prizren the first attraction to visit is the fortress of Prizren. Known also the Crown of Prizren it has also been the area of some of the ancients settlements of the old city. It offers an amazing, picturesque view of the city where numerous mosques and minarets are fused with the churches, houses, and Turkish baths.

Walking in Prizren.
Situated in the heart of the city, it is the biggest and the most visited mosque in the city. Still functional even today, this mosque will amaze you with the elegant decor and unique square shape of the main building., Build at the beginning of the 18th century this mosque has been restored and fanatically preserved as one of the greatest religious and cultural values of the city.

Considered also as one of the most important meetings of Albanian Patriots of the 19th Century, the League of Prizren was a Political and Patriotic movement who wanted to save Albanian Lands from being divided inbetween Balkan Countries. Visit at the house of League and The Ethnographic Museum. It is an interesting panorama of the traditional local life of Traditional Kosovo.

Stop At: Our Lady of Ljevis, Sahat Kulla, Prizren Kosovo

Closed for renovation, this 14th Century church is unique in its style and values. Protected now by UNESCO it was highly damaged in 2004. Build by the same ruler as the mon monastery of Gracanica, part of the Unesco as well.