Private One Day Tour of Ohrid and Pogradec from Tirana 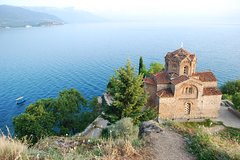 Private One Day Tour of Ohrid and Pogradec from Tirana

According to a UNESCO article, the town of Ohrid is one of the Oldest Human Settlements in Europe. Furthermore, it lies in the shores of Ohrid, one of the oldest lakes in the world as well. It has been in centuries a crossway if different Cultures, traditions, and different invasions.

Called as the Jerusalem of the Balkan, Ohrid has played a huge role in the spread of Slavic Orthodoxy. It has had 365 Churches, one per each day of the year and dating from the 11th Century.

Leaving Tirana at 09:00 we will head toward the South-East of Albania. After entering the Macedonian Border the first city is Struga, named after an ancient local legend of a young boy.
Ohrid is situated next to Stuga, in the shores of the same lake for centuries has been the place when different cultures have to meet each other. Founded from Ancient Ilirain and Greek tribes it has passed into many different riling systems such as Roman, Byzantine, Bulgarian, Turkish, Serbian, Yugoslavia and lately being part of the Independent Republic of North Macedonia.
Situated into the Hills of the City it was built under the rule of Bulgarian Tsar Samuil on the 10th Century. It is believed that it has built-in the settlements of an ancient fortification of 4th century BCE, build by Philip 2nd.

Situated on the cliff over Kaneo Beach overlooking Lake Ohrid in the city of Ohrid, North Macedonia. The church is dedicated to John of Patmos, the writer of Revelation, who has been by some considered to be the same person as John the Apostle.

Visit the City center and the Old Bazaar area where we will see the typical houses of Ohrid. Most of the city is paved in Stone, a reason why it was first called Lyhnidas coming from the Latin Language (a precious stone that emits light)

Situated 28 Km from Ohrid it is an early X Century founded from St Naum of Ohrid himself. It is where he is also graved after his death. The Monastery Complex was part of Albanian border from 1912  1925 where it was given to Yugoslavia in return of their help, bringing him on power.
Visit at Tushemisht
Leaving Macedonian border we will head toward Albania and stop at Tushemisht. Different from most of the Villages if the Albanian Part, it is very similar to Ohrid with the main Orthodox religion.
Return in Tirana. End of the Tour

Short Stop at the Natural Park of Drilon