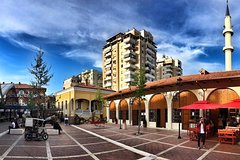 This tour will introduce you to the local Tirana and its cultural, historical and culinary heritage. As an urban metropolis, it is full of contrasts in which can easily be noticed the scars from the past and the present. Above all, it is the crossway of different periods of Albanian Modern History.

This Private tour of Tirana is a combination of City Walking Tour and Driving Tour. During the walking part, we will be able to explore most of the City Centre of Tirana, Main Boulevard, New Bazaar Area and Bllok.

Out of the city we drive toward the Bunkart, a former Nuclear Bunkers of the 70. The most lively souvenir of the Albanian Communist Period. The next station will be driving to Dajti Mountain when we get the cable car to enjoy the great view of Tirana.

Built during the 70s it was an Anti-Atomic Bunker that will protect the Albanian Communist Elite in case of a Nuclear Attack. With more than 100 rooms, now it is a Unique Museum that introduces us the everyday Albanian Life after the Second World War till the 90, under the Communist Regime.

Not far from Bunkart we will get the Cable Car which sends us near the top of Dajti Mountain when we can enjoy an amazing view of the City.

One of the 10th most interesting Bazaars in Balkans! Renovated under the same project as the Main Square it is a good combination of Local Food, Souvenirs shop and lots of bars.

The former Residencial Area of the Communist Elite. It is where the Enver Hoxha used to live with his family and his close supporters. During the Communist time, entering there was not possible as it was guarded by the military.

Now, totally different is the main business and nightlife area of Tirana. Still, the Villa of Enver Hoxha stands there, as the last souvenir of the past regime.

Stop At: Skanderbeg Square, At the center of Tirana, Tirana Albania

Rebuild recently it is the biggest Main Square of Albania. Surrounded by the Government Buildings and in the middle of the 2 main boulevards of Tirana. This square had seen a lot and had lots to tell.