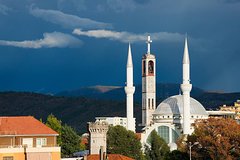 Albanians consider religious tolerance to be a fundamental value, one more deeply rooted

in the Albanian tradition and its civic and moral values than experienced as a social practice,

conviction or policy, that relies upon knowledge of different religions and acceptance of religious

Stop At: Fatih Mosque, Rruga Xhamia, Durres Albania
The Fatih Mosque (Albanian: Xhamia e Fatihut) is a Cultural Monument of Albania. It was built in 1502 and named after the Ottoman Turkish Sultan Mehmed the Conqueror ). Closed by the Communist authorities, it became a cultural monument in 1973.
Duration: 30 minutes

Stop At: Durres Amphitheatre, Rruga Kalase, Durres Albania
Visit the Roman Amphitheatre from the 2nd century AD. Built during the reign of Emperor Trajan, this is one of the biggest amphitheaters in the Balkans.
Duration: 30 minutes

Pass By: Durres Castle, Durres Albania
Learn more about the city's and the country's history of the Castle.

Then head to the Venetian Tower, where a flight of stairs will take you to the roof and give you some of the best views of this old city, there you can relax and have a coffee break.

Stop At: Gjirokastra Bazaar, Old town, Gjirokaster Albania
Gjirokastra (approx. 3-hour drive.) Between the two cities, we will happily stop for a break or a coffee on the way. The main interesting sight is Gjirokastra & Antigonea, is the ancient city. Walking tour for 2 hours straight to Gjirokastra Castle which is one of the largest in Balkans and one of the most magnificent structures.
Duration: 1 hour

Pass By: Gjirokastra Bazaar, Old town, Gjirokaster Albania
Built over 500 years ago, the Gjirokastra Bazaar is one of eight oldest districts of Gjirokastër, stretching out long below the castle walls. It remains under continuous reconstruction due to its age and historical significance as a UNESCO national and world heritage site

Pass By: Gjirokaster Mosque, Sheshi Cerciz Topulli, Gjirokaster Albania
This mosque is a true testimony of the communist religious ban in Albania. Spared from destruction from its religious importance, the mosque was transformed as a circus training centre only to return to its original setting after the 1990s in the form of a Muslim school.

Pass By: Kruja Castle, Near Tirana, Kruje 1501 Albania
Albanias Kruja Castle was the center of its struggle against the Ottoman Empire in the 15th century, led by national hero George Skanderberg

Pass By: Old Bazaar (Pazari i Vjeter), Rruga Albanopolis, Kruje 1501 Albania
The Old Bazaar of Kruja dates to the 17th century and is known by the locals as Derexhiku. It was built approximately 400 years ago and had about 200 shops starting from neat Kruja City Hall to the entrance gates of Kruja Castle. The first shops are thought to have started next to the castle entrance and over the years the shops expanded towards what is now the center of town. The shops line the street on both sides creating roads of roof-covered storefronts whose sloping roofs create an arcade along its length. The main crafts and trades in these shops have been leather working, silk, kitchen utensils, furniture, tailoring, pottery, carpentry, cafes, wood carving, butchers, barbers, shoemakers, blacksmiths, and wool workers. In the Old Bazaar today you can find objects and handmade items from traditional artisans as well as antiques collected from Kruja and the surrounding areas.

Stop At: Museumi Gjergj Kastrioti (Skenderbeu), Rruga Kala, Kruje 1501 Albania
The National Museum "George Castrioti Skanderbeg" (Albanian: Muzeu Kombëtar "Gjergj Kastrioti Skënderbeu"), also known as the Skanderbeg Museum or the Kruja Museum, is located in Krujë and is one of the most important and visited museums in Albania. The museum was built at the end of the 70's and was inaugurated on November 1, 1982. Its architecture was designed by architects Pirro Vaso and Pranvera Hoxha, and it has the character of a memorial that is treated as a northern Albanian tower.The name of the museum is in the honor of the Albanian national hero Gjergj Kastrioti Skënderbej.
Duration: 30 minutes

Stop At: St. Anthony Church, Cape of Rodon, Durres Albania
We will visit The Church of St. Anthony which was built in the XIV-XV centuries and is still possible to visit now days. It is one of the 4 Monasteries that used to exist before the castle was build. The church of St. Anthony belongs to the Roman-Gothic architecture, which is seen at the sharp bows of the structure.

Stop At: Rodoni Castle, Cape of Rodon Albania
Cape of Rodon is located on the coast of Adriatic Sea on the west part of Albania. It is the biggest Cape in Albania. In the north of the Cape, streams the river of Ishmi. Start hiking toward Rodoni Castle where you will visit the Castle of Scanderbeg, which was built by him in 1451-1452. This castle was used by the Army of Scanderbeg to control Adriatic Sea, from the invasion of Venetians. The walls of the Castle were 10-12 M high and 3-6 m wide.
Duration: 1 hour

Stop At: Zvernec Monastery, Zvernec Island, Vlore Albania
Zvernec Monastery  is an old byzantine monastery dedicated to Virgin Mary and situated no more than 20 minutes away from the city center, in one of the small islands of Vlora coastline.
Duration: 30 minutes

Stop At: Muradie Mosque, Vlore Albania
The Muradie Mosque (Albanian: Xhamia e Muradies) is a Cultural Monument of Albania, located in Vlorë. Initially, the now called "Muradie Mosque," was a Byzantine Church. The Byzantine architectural elements are evident with the Dome and its supporting polygon raised base, the arched windows, the classical triangular forms topping the side walls, and most importantly the brick work which is quite characteristic of the church buildings of the byzantine and renaissance period.
Duration: 15 minutes

Pass By: Independence Monument, Sheshi Pavaresia, Vlore Albania
The Monument of Independence is a monument in Vlorë, Albania, dedicated to the Albanian Declaration of Independence and worked by Albanian sculptors, Muntaz Dhrami and Kristaq Rama.It is found in the Flag's Plaza, near the building where the first Albanian government worked in 1913.

Stop At: Church of the Black Madonna, Letnica Kosovo
In the small town of Letnica Kosovo sits the Black Madonna Church. Bordering Macedonia and sitting on a hill in the Black Mountains the Church looks over the town. The twin bell towers have welcomed the faithful and during the Feast of The Assumption in mid-August pilgrims from all over come to worship before the rare 300 year old Black Madonna statue that hangs above the altar.Said to have been stolen 3 times over the years the statue always miraculously comes home. The Church has been drawing pilgrims for years and it was here where Agnes Gonxha Bojaxhiu from nearby Skopje Macedonia found her calling. Agnes had been accompanying her parents to the Church yearly since an early age and in 1928 at the age of 17 she dedicated her life to serving those less fortunateKnown later in life as Blessed Mother Teresa of Calcutta she once said By blood, I am Albanian, By citizenship, an Indian. By faith, I am a Catholic nun. As to my calling, I belong to the world. As to my heart, I belong entirely to the Heart of Jesus.
Duration: 2 hours

No meals included on this day.
Accommodation included: Overnight in Kosovo