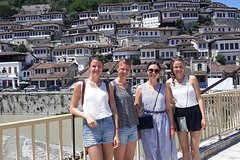 Albania is the last unexplored area of the Europian touristic map, so the interest to visit this small and beautiful country is growing more and more.

Albania has become a favorite destination for travelers. Having been almost entirely closed off under the hard-line communist regime for many decades, the country is still considered an exotic tourist destination. The natural scenery and beauty of the mountainous countryside is therefore largely unspoilt. Visitors can discover gorgeous beaches.

Day 1: Hiking to Cape of Rodon

Stop At: Rodoni Castle, Cape of Rodon Albania
Cape of Rodon is located on the coast of Adriatic Sea on the west part of Albania. It is the biggest Cape in Albania. In the north of the Cape, streams the river of Ishmi. Start hiking toward Rodoni Castle where you will visit the Castle of Scanderbeg, which was built by him in 1451-1452. This castle was used by the Army of Scanderbeg to control Adriatic Sea, from the invasion of Venetians. The walls of the Castle were 10-12 M high and 3-6 m wide.
Duration: 2 hours

Stop At: St. Anthony Church, Cape of Rodon, Durres Albania
We will visit The Church of St. Anthony which was built in the XIV-XV centuries and is still possible to visit now days. It is one of the 4 Monasteries that used to exist before the castle was build. The church of St. Anthony belongs to the Roman-Gothic architecture, which is seen at the sharp bows of the structure.

Stop At: Kruja Castle, Near Tirana, Kruje 1501 Albania
Albanias Kruja Castle was the center of its struggle against the Ottoman Empire in the 15th century, led by national hero George Skanderberg.
Duration: 30 minutes

Stop At: Museumi Gjergj Kastrioti (Skenderbeu), Rruga Kala, Kruje 1501 Albania
The National Museum "George Castrioti Skanderbeg" (Albanian: Muzeu Kombëtar "Gjergj Kastrioti Skënderbeu"), also known as the Skanderbeg Museum or the Kruja Museum, is located in Krujë and is one of the most important and visited museums in Albania. The museum was built at the end of the 70's and was inaugurated on November 1, 1982. Its architecture was designed by architects Pirro Vaso and Pranvera Hoxha, and it has the character of a memorial that is treated as a northern Albanian tower.The name of the museum is in the honor of the Albanian national hero Gjergj Kastrioti Skënderbej.
Duration: 30 minutes

Pass By: Old Bazaar (Pazari i Vjeter), Rruga Albanopolis, Kruje 1501 Albania
The Old Bazaar of Kruja dates to the 17th century and is known by the locals as Derexhiku. It was built approximately 400 years ago and had about 200 shops starting from neat Kruja City Hall to the entrance gates of Kruja Castle. The first shops are thought to have started next to the castle entrance and over the years the shops expanded towards what is now the center of town. The shops line the street on both sides creating roads of roof-covered storefronts whose sloping roofs create an arcade along its length. The main crafts and trades in these shops have been leather working, silk, kitchen utensils, furniture, tailoring, pottery, carpentry, cafes, wood carving, butchers, barbers, shoemakers, blacksmiths, and wool workers. In the Old Bazaar today you can find objects and handmade items from traditional artisans as well as antiques collected from Kruja and the surrounding areas.

Pass By: Ethnographic Museum of Kruja, Fortress of Kruja, Kruje 1501 Albania
The National Ethnographic Museum in Kruja was inaugurated on November 20, 1989. It is placed in a characteristic urban building of 1764. This building is a first class culture monument. It has 15-16 rooms and the objects exhibited outside give a complete view of the crafts applied in Kruja

Stop At: Berat Castle, Rruga Mihal Komnena, Berat 5001 Albania
The tour starts at 8:30 am from Adriatik Hotel and it will take approximately 2 hours to reach Berat city. Once we get to the city, we will visit Berat Castle, which dates back to 4th century BC. There, you will learn a little history of Berat. The castle is one of the biggest inhabited castles and has many Byzantine churches, as well as some mosques built during the Ottoman era, which began in 1417.
Duration: 1 minute

Stop At: National Iconographic Museum Onufri, Located in the Inner Part of Saint Mary Church in Berat Castel, Berat Albania
Our walk in the castle will take us to Onufri Museum, which is set up inside the cathedral of Saint Mary, renovated in the 18th century. Besides the beautifully carved iconostasis, you can also admire the icons of the renowned Albanian painter Onufri.
Duration: 40 minutes

Pass By: Gorica Bridge, Berat 5001 Albania
Our next stop is in the old quarters of Mangalem and Gorica that connect with each other by the Gorica Bridge over the Osumi River

The bridge was built in XVIII century. It was originally made of wood, and in 1780, during the ruling of Ahmet Kurt Pasha, it was rebuilt with stones. The Bridge of Gorica had a complete reconstruction during the years 1920-1930.

Pass By: The King Mosque, Rruga Kurt Pasha, Berat Albania
The King Mosque also known as the Sultan's Mosqueor Sultan Bayezid Mosque is a mosque and a Cultural Monument of Albania.It was built in the 15th century by the Ottoman sultan Bayezid II.

Pass By: Cobo Winery, Ura Vajgurore 1001 Albania
On the way back to the hotel, we will stop for tasting Albanian wine in the charming Çobo Winery. The tour will include an oversight of the wine making process and detailed explanations that paint a glowing picture of the family's history and the origins of their wines.(Optional)

Stop At: Zvernec Monastery, Zvernec Island, Vlore Albania
Zvernec Monastery  is an old byzantine monastery dedicated to Virgin Mary and situated no more than 20 minutes away from the city center, in one of the small islands of Vlora coastline.
Duration: 30 minutes

Pass By: Independence Monument, Sheshi Pavaresia, Vlore Albania
The Monument of Independence is a monument in Vlorë, Albania, dedicated to the Albanian Declaration of Independence and worked by Albanian sculptors, Muntaz Dhrami and Kristaq Rama.It is found in the Flag's Plaza, near the building where the first Albanian government worked in 1913.

Pass By: Muradie Mosque, Vlore Albania
The Muradie Mosque (Albanian: Xhamia e Muradies) is a Cultural Monument of Albania, located in Vlorë. Initially, the now called "Muradie Mosque," was a Byzantine Church. The Byzantine architectural elements are evident with the Dome and its supporting polygon raised base, the arched windows, the classical triangular forms topping the side walls, and most importantly the brick work which is quite characteristic of the church buildings of the byzantine and renaissance period.

Stop At: Sh8, Llogara National Park Albania
Watch clouds descending onto the mountain, shepherds on the plains guiding their herds, and thick forests where deer, wild boar and wolves roam in this mountainside national park high above the Albanian Riviera.
Duration: 1 hour

No meals included on this day.
Accommodation included: Overnight at Adriatik Hotel 5 star