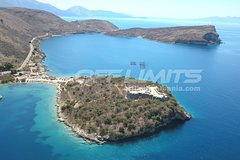 Drive drive along the crystal clear waters of the Albanian South Riviera on this three-day tour. See some of the countrys most well known beaches, as well as hidden geographic wonders from the comfort of a four-wheel drive vehicle with a driver for your private party. Tour begins and ends in Tirana, includes breakfast, two nights accommodation, and hotel transfers.

The tour starts with a pick-up from your hotel. After breakfast and a brief informational meeting, depart at 9 oclock. The first stop is Durres, located on the Adriatic Sea in the mid-western part of Albania. Enjoy a short coffee stop with a seaside view, and then head to Vlore where you will see the division of the Adriatic and the Ionian Sea.

Next, stop for lunch at the national park of Llogara, a beautiful spot surrounded by pine trees, sitting at an impressive elevation of 3,300 feet (1000 meters) above sea level. The panoramic views here make a lovely backdrop for photos, which you will have time to take on the way down to the shore. Visit several more beaches before stopping for the night in Himare, where you will have dinner and a night in a hotel.

After breakfast, depart for Sarande and stop to visit of the historic castle of 'Ali Pasha' on the way. Continue to Borsh beach, which is one of the longest beaches in south Albania with a coastline stretching 1.8 miles (three km). After free time on the beach, experience some off-road driving as you travel to a village called Nivice for lunch. The final stop is Sarande the last city in south Albania. Spend the afternoon on the beach followed by dinner and some lively nightlife in Sarande before spending the night at a Sarande Hotel.

After breakfast, depart for one of Albanias most beautiful sights: the Blue Eye. A natural phenomenon created by an underground spring, the Blue Eye is known its clear blue water, which flows from the spring into a 165-foot (50 m) deep pool.

Next, drive to Gjirokaster, an ancient city in the historical region of Epirius. Nestled in a valley of the Gjere Mountains, Gjirokaster sits beside the Drino River and is famous for its beautiful stone houses and steep stone streets. Take some time to wander the ruins of the castle, which is home to a military museum featuring German and Italian artillery from the Communist resistance as well as a captured US Air Force plane, which commemorates the Communist regimes struggle against the 'imperialist' western powers. Enjoy lunch in the ancient city and then finish the tour with a stop in Tirana.