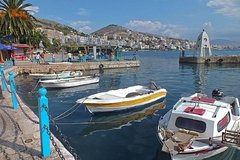 We will tour and explore Saranda, a city with more than 2000 years of history (also known as Onhezmi).

Saranda is on the southern coast of Albania, rich in rare values of Albanian and European cultural and archaeological heritage.

We will explore The Incoming Gate of Onhezmi (a monument); The Albanian Numismatic Exhibition; an Archaeological Museum; The Museum of Heritage; an Art Gallery; The Orthodox Church; The Castle of Lekuresi and The V-VI Synagogue Complex (within the Castle).

On this tour we will drive up to (and explore) The Fortress of Lekuresi, believed to have been built in 1537, when Sultan Sulejmani attacked Corfu.

The castle is located within the ruins of Lekuresi village, on the top of the hill, above the city of Saranda. It really is a strategic position where you can see the entire bay of Saranda, the road that leads to Butrint and the islands of Ksamil. In addition, you can also see the Island of Corfu.

We will also visit the V-VI Synagogue Complex, located within the castle on its eastern side - that in the final phase, the Jewish cult complex was transformed into a Christian cult building: the Paleochristian Basilica.

We will visit the Monument: The Incoming Gate of Onhezmi;

The Museum of Heritage, the Art Gallery and the Orthodox Church