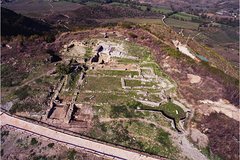 Archaeological research in Phenicia revealed that this city in ancient times and later developed a strong cult activity as the images which are displayed both on findings and Orthodox Christian that followed. A few meters away from the Basilica there are Christian church remains, while at "Old yard" ruins of early Christian churches with various mosaics. The Episcopal Church honored the Virgin name "Zoodochos Pigi" seems originally to have been built on ancient basilica and later rebuilt new with the same name in the town center .

Distinguished by the originality of architecture. The two-aisled nave is housed with four domes, based on interior walls and a central column, which was insufficient to support such a large weight and trapped in the late 18 th century in a massive pillar. The splint covered with three semicircular arches and housed with three twin roofs, separated from the main temple with four columns.

Stop At: Monastery of Saint Michael, Near Finiq, Mesopotam 9717 Albania

Monastery Mesopotamos rises east of Phenicia. Near the small town and east of that is the monastery of St. Nicholas, from which survives the universal and part of a tower (campanile).

The huge space of the theater, of about 17 000 jobs in the middle of the hill with an opening to the monastery of Saranda functioned then as assembly area of ​​the "League of Epirus of about Foinikin" in which democratic decisions taken for peace or war or litigation. Power exercised then three generals, of whom one was the eponymous archon, Hipparchus, the Registrar of the House and the prostate derived from the three main panels: the Molossoi, the Chaonians and Thesprotians. All those elected by year term by the general meeting. worship of Phenicia was Dodona.