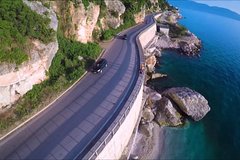 Early morning departure to Ardenica, where you can visit The Monastery of the Nativity of the Theotokos and the Church of St.Mary. The church is fully decorated with frescoes by two brothers, Constantine and Athanasius Zografi from Korca and a local painter, Constantine. After the visit, continue to visit the Ancient City of Apollonia. Apollonia was founded in 588 BCE by Greek colonists from Corfu and Corinth, on a site initially occupied by Illyrian tribes. Here you can visit Archeological Site of Apollonia, Byzantine Church of St.Mary and the Monastery. Inside the Monastery you can visit Small Archaeological Museum. Free time for lunch before proceeding our trip to Vlora, city of Independence.

Visit the Monument of Independence in the Flag Square and its Museum, the Mosque of Muradie, built 1452 and panoramic tour through the city.

Sitting at 30 meters above sea level, this picturesque island is named after the village of the same name, located about 13 km from the city of Vlora. Famous for its stunning forest of tall pines extending along nine hectares of land, the fairly small island also hosts the well-preserved 13th century byzantine Monastery of St. Mary. While Zvërnec is indeed compact in size, at approximately 400 meters in length and 300 meters in width, the island packs a magical experience.

Vlorë is the third most populous city of Albania. It is the capital of the surrounding Vlorë County. Located on the southeastern Adriatic Sea, it is one of the country's southernmost dominant economic and cultural centers.

Vlorë was founded as an Ancient Greek colony in the sixth century BC under the name of Aulon and has been continuously inhabited ever since. It became the seat of a bishopric. In modern times, the city served briefly as the capital of Albania. Notably, the Albanian Declaration of Independence was proclaimed here on November 28 in 1912. Culturally and economically it is one of the most significant cities of southwestern Albania. Vlorë is home to Albania's second largest port, the Port of Vlorë.

Ardenica Monastery is along the national road that links Lushnjë to Fier. Built by Byzantine Emperor, Andronikos II Palaiologos in 1282 after the victory against the Angevins in the Siege of Berat, the monastery is famous as the place where, in 1451, was celebrated the marriage of Scanderbeg, the national hero of Albania, with Andronika Arianiti. In 1780 the Monastery started a theological school to prepare clerics in Greek Orthodoxy. It had an important library with 32,000 volumes that got completely burned by a fire in 1932. The Church of Saint Mary within the monastery contains frescos from brothers Kostandin and Athanas Zografi, notably one of saint John Kukuzelis, born in Durrës, Albania.

Apollonia is located on the right bank of the Aous river (modern-day Vjosë). Its ruins are situated in the Fier County, next to the village of Pojani (Polina), in modern-day Albania. Apollonia was founded in 588 BCE by Greek colonists from Corfu and Corinth on a site where native Illyrian tribes lived, and was perhaps the most important of the several classical towns known as Apollonia. Apollonia flourished in the Roman period and was home to a renowned school of philosophy, but began to decline in the 3rd century AD when its harbor started silting up as a result of an earthquake. It was abandoned by the end of Late Antiquity.

The name of the city is mentioned among the modern bishoprics of the Orthodox Autocephalous Church of Albania (Apollonia and Fier). Apollonia is also a titular see of the Latin Church.