2 Days and 1 Night in Montevideo 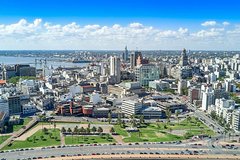 2 Days and 1 Night in Montevideo

Montevideo is the capital and most important and influential city in Uruguay, seat of MERCOSUR. It hosts one of the most important ports in the region. This metropolis has an old district with a strong Spanish influence, with the main focus on Plaza de la Independencia (Independence square) and new areas, such as Carrasco, Punta Carretas, Pocitos and Malvin.

Stop At: Rambla de Montevideo, Montevideo Uruguay
Your itinerary begins with the pick up at your hotel/apartment in Buenos Aires to go to the ferry terminal. Once there, you will board the fast ferry to cross Río de la Plata and get to Montevideo.

Upon arrival, you will be received by a local tour guide who will help you to check in at the hotel. A little later, you will enjoy a 3-hour city tour visiting the main attractions, the historic area and different districts in Montevideo.

Once this tour is finished, your tour guide will give you useful tips about restaurants, museums and other activities for the evening and the following day.

Stop At: Mirador Panoramico de Montevideo, Av. 18 de Julio 1360, Montevideo 11200 Uruguay
The Panoramic Viewpoint, located almost 80 meters high, reveals one of the most complete and emblematic views of the capital. This place worked for the first time in 1979; where its restaurant and cafeteria were stages of different social events.
Duration: 30 minutes

Stop At: Rambla de Montevideo, Montevideo Uruguay
The beaches of Montevideo are bordered by a boulevard of almost 30 kilometers long that makes the coast one of the most distinguished attractions of the city. It`s one of the main open spaces to which the Montevideans go daily to walk and practice sports.
Duration: 1 hour

It`s located on a boulevard that offers the visitor a panoramic view of the Río de la Plata.

In addition to the sunset, one of the points worth stopping to visit is a curious bronze sculpture, located on one of the edges of the ravine.

The sculpture expresses the struggle for life at sea through circular figures, stars, marine animals and hands that seek to hold onto a ship. At about two meters, a gray granite plaque reads "Monument to the Fallen in Service Act of the Navy", hence its current name is "Plaza de la Armada".
Duration: 15 minutes

Stop At: Barrio Carrasco, 11500 Montevideo, Montevideo Department, Uruguay
Carrasco is a neighborhood located about 15 kilometers from the center of the city, to the southeast of it. The neighborhood became the most luxurious residential area in Montevideo, where the upper class of the city lives.

The Boulevard of Montevideo finds in Carrasco one of its most successful manifestations from the landscape point of view. Strolling along Avenida Arocena, perpendicular to the river, where most of the neighborhood's shops and restaurants are located.
Duration: 30 minutes

Stop At: Parque Batlle, Alfredo Navarro, Montevideo 11600 Uruguay
Located south of Italia Avenue, and north of Rivera Avenue, two of the most important arteries of Montevideo, is the Batlle Park neighborhood, named after the large green lung that is incorporated in the center of the area. It is framed by neighborhoods with a different dynamism from what it has, such as Tres Cruces, Pocitos or La Blanqueada, and it has a very peculiar architecture.
Duration: 30 minutes

Stop At: Ciudad Vieja, Pza. Independencia 832 Piso 1, Montevideo Uruguay
When traveling through the Old City we find colonial, baroque and classic buildings of great architectural and heritage value. In its origins, the site was residential, but over the years it was occupying offices and shops, and becoming the center of financial activity in the country.

Going through it takes us back in time, and forces us to breathe an air as old as cozy. The fronts of each building deserve hours of contemplation; no doubt the masons of that time were true artists with their spoons and spatulas.
Duration: 1 hour 30 minutes

Stop At: Palacio Legislativo, Av. de las Leyes s/n, Montevideo 11800 Uruguay
The building in which the Legislative Power operates, always known as the Legislative Palace, is undoubtedly the most important testimonial example that the country has, of a beautiful and balanced neo-classical architecture, of strong Greek inspiration in the set of its facades exterior, efficient functional design, and dazzling in the design of some of its interior spaces and decoration.
Duration: 10 minutes

Stop At: Mercado Agricola Montevideo - MAM, Dr.Jose L. Terra 2220, Montevideo 11814 Uruguay
It`s a new tourist spot in the city and a different activity for the whole family, where all the senses play with the freshness and history of the place.

The renewed Mercado Agrícola de Montevideo is the first Retail Mall specialized in the sale of non-perishable and fresh foods, that have the city`s identity impregnated, and where you will find exotic products and a gourmet proposal.

Its proposal consists of a complete range of fruit and vegetables, fresh food, natural specialties, gastronomy and complemented by a range of products and services, which makes it a unique place.
Duration: 30 minutes

No meals included on this day.
Accommodation included: Overnight accommodation at a 4* Hotel in Montevideo.

Stop At: Rambla de Montevideo, Montevideo Uruguay
After spending the night at your hotel, you will have a free day to enjoy the different districts, squares, cathedrals, small coffee bars, restaurants, museums and handicraft shops.

During the afternoon, you will be picked up at the hotel to be driven to the terminal to get the ferry back to Buenos Aires. A private driver will be waiting for you upon arrival to take you back to your selected location.

Meals included:
• Breakfast: Breakfast at the 4* Hotel in Montevideo.
No accommodation included on this day.