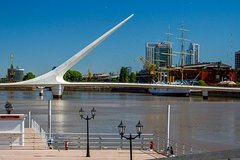 A driver will be waiting for passengers at Ezeiza international Airport of Buenos Aires holding a sign with the name of the passenger to facilitate the meeting. In this way, the passenger will recognize the driver as soon as he arrives at his destination. On your first day you will enjoy a city tour followed by a Dinner and Tango Show in the evening. On your second day you will explore the Tigre Delta and take part at an traditional Argentine cooking class.

driver as soon as he arrives at his destination.
Duration: 1 hour

Stop At: Casa Rosada, Calle Balcarce 50, Buenos Aires C1064AAB Argentina
The Casa Rosada is the seat of the Executive Power of the Argentine Republic. Within it is the office of the president of the Argentine Nation. This building is located in 50 Balcarce Street, in the neighborhood of Monserrat in the City of Buenos Aires, in front of the historic Plaza de Mayo
Duration: 15 minutes

Stop At: La Boca, Avda Almirante Brown, Buenos Aires Argentina
La Boca is a working class neighborhood that has several attractions next to the Riachuelo. Asadores and street artists mark the entire Caminito, a narrow alley flanked by brightly colored zinc houses that evoke its origin as an immigrant neighborhood.
Duration: 15 minutes

Pass By: Calle Defensa Bairro San Telmo, Buenos Aires Argentina
San Telmo is an old neighborhood with bohemian touch thanks to its temporary art galleries, night bars and street murals. The Defensa street, full of antique shops and bustling brasseries, passes through the Dorrego square, where many tourists come on Sundays to see the street market and street performances. Winding roads run through Lezama Park among jacaranda trees. Here is also the National Historical Museum, Italianate style. The neighborhood is full of exclusive restaurants with tango shows.

Stop At: Puerto Madero, Rosario Vera Penaloza, Buenos Aires Argentina
Puerto Madero is a renovated neighborhood that faces the bay. Its renovated redbrick buildings house exclusive grills frequented by tourists and businessmen at lunchtime. There are also modern skyscrapers with multinationals and luxury apartments. The lakes in the area are surrounded by trails, as is the ecological reserve Costanera Sur, very popular with runners and families. The elegant suspension bridge of the Woman connects the ports. In this Port we will have lunch sailing at The Humberto M Boat.
Duration: 15 minutes

Pass By: Cabildo, Bolivar 65, Buenos Aires Argentina
The Cabildo of Buenos Aires, seat of the colonial administration, occupies the same place since 1580, but its building underwent successive modifications. The first references of the Cabildo come from the beginning of the XVII century. By 1608, it had adobe walls and a thatched roof. The interior was divided into two: a room for meetings and another that worked as a prison. The tiles arrived two years later and, by the middle of the century, the Cabildo had a balcony and towers of wood and clay. Since 1938, the Cabildo has hosted the National Commission of Museums and Monuments and Historical Places, and the National Historical Museum of the Cabildo of Buenos Aires and the May Revolution.

Pass By: Avenida de Mayo, Buenos Aires Argentina
Describe what travelers will see and do here


Pass By: Avenida 9 De Julio, Centro, Buenos Aires Argentina
For its 140 meters wide, it is known as "the widest avenue" in the world. It goes through the center of the city from Constitución to Av. Del Libertador. It was inaugurated in 1937 and originally designed by the prestigious landscaper Carlos Thays. It has 1000 jacarandas, ceibos and cherry trees, many of them donated by Japan. The challenge of those who cross it usually is to do it walking from one end to the other in a single attempt and without the traffic lights interrupting.

Stop At: Calle Museo Caminito, Av. Don Pedro de Mendoza y Magallanes (La Vuelta de Rocha promenade), Buenos Aires Argentina
Caminito is one of the most emblematic promenades of the city and of the unmissable attractions for those who visit it. With its typical sheet metal tenements in the neighborhood of La Boca, which show its walls painted in different colors, it is also an open-air museum of almost 150 meters in length. Its sinuous layout is due to the fact that it follows the course of a stream that flowed until the beginning of the 20th century
Duration: 15 minutes

Pass By: Avenida Corrientes, Buenos Aires Argentina
Born in the neighborhood of Puerto Madero and ends in Chacarita. Throughout its 70 blocks, it crosses the neighborhoods of Balvanera, all closely linked to the history of Tango and culture. Being one of the main cultural axes of the city, the Avenue owes its name to the first city of the interior of the country that supported the Argentine Independence.

Stop At: Cafe de los Angelitos, Avenida Rivadavia 2100, Buenos Aires C1033AAX Argentina
Dinner and Tango show - transfer in/out included - Dinner and show: Is one of the most traditional place of Buenos Aires with its delicious gourmand gastronomy. Live witness of more than a hundred years of the history of Buenos Aires.

Talking about Rivadavia and Rincón is talking about a corner of tango, about the Café de los Angelitos, about the morning, midday, afternoon and night of the most traditional coffee house of Buenos Aires.

From Monday to Monday, this emblematic meeting place for outstanding national celebrities from culture, politics, sports and arts, is proud to open its doors to receive new visitors.

With a series of 350 especially selected photographs placed on its walls, a stage box where, at some moment during the day, a live large accordion can be heard, and a moderate and elegant decoration, it will recreate the atmosphere and the environment of the 20th century for the visitors.
Duration: 4 hours

Stop At: Museo de arte Tigre, Paseo Victorica 972, Tigre B1648DVT Argentina
There is no shortage of reasons to visit the Tigre Art Museum: one of the most emblematic constructions of Tigre and a perfectly preserved art collection on the banks of the river.
Duration: 15 minutes

Pass By: Buenos Aires Delta, Buenos Aires 1395, B1648DQA Gran Buenos Aires, Buenos Aires, Argentina
Tigre is an Argentine locality located just north of Buenos Aires. It serves as a base to visit the rivers and the marshes of the extensive delta of the Paraná. The old fruit trade port of the city, Puerto de Frutos, is now a busy craft market. Nearby, the Museo del Mate goes through the history of this traditional Argentine drink and has a mate bar. The Paseo Victorica is a promenade along the river with numerous rowing clubs and restaurants.

Stop At: Puerto de Frutos, Calle Sarmiento 160, Tigre B1648APD Argentina
The Puerto de frutos is a small jetty on the banks of the Luján River in the town of Tigre, next to which the fruit market is located. Open all week, this particular sector of the city is also a shopping trip, an encounter with the flavors of the Delta, enjoying its colorful views that make it a unique place.

The Puerto de Frutos is projected as the largest open-air shopping center in Argentina. A place where the traditional attributes and values of Tigre and the new concepts in modernity coexist in design.
Duration: 30 minutes

Stop At: Delta Terra Natural Reserve, Arroyo Rama Negra Chico & Espera, Tigre Argentina
During your visit you will discover a fascinating ecosystem with a rich variety of flora and fauna in its natural environment. Through its trails you can explore the diversity of environments present in the Buenos Aires delta. You can also visit one of the oldest nurseries in the Delta and know the task of rescue of wildlife that is carried out.
Duration: 3 hours

Stop At: Transfers Ezeiza, Avenida de Mayo 1370, Buenos Aires C1085ABQ Argentina
The driver will pick you up to your hotel in order to take you back to the International Ezeiza airport
Duration: 1 hour