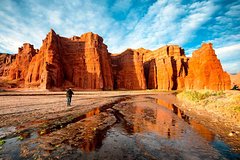 Cafayate is the second Argentine center for the production of quality wine, it is a popular tourist destination, but still has a quiet atmosphere of a small town. It is spectacularly picturesque, with the green of the vines backed by high mountains, it is one of the most seductive destinations in the northwest of Argentina.

Departure in the morning through the Lerma Valley, passing through picturesque villages and gorges, such as Cerrilos, La Merced, Ampascachi, La Viña, where a picturesque settlement called La Posta de la Cabra is located, with a peaceful environment accompanied by a mountainous landscape. of showy trees. Continuing to arrive in Germany, anteroom of the Calchaquíes Valleys, color is multiplied in all its nuances in the journey of this beautiful ravine.

On the side of the road that is accompanied by the Las Conchas River, wind erosion has created a succession of natural caprices such as The Devil's Throat, The Amphitheater, the gigantic fissure of the hill that forms a spectacular rock scenario, Los Castillos, and others outstanding figures that depend on the imagination and the different hours when the sun's rays illuminate the mountains of the magical ravine.

Continuing up, to the junction of the Valleys Santa María and Calchaquí with the Quebrada de Las Conchas, with views of the Tres Cruces and Morales hills and with this mountainous frame, at the foot of the San Isidro hill, flanked by rivers and within a belt of vineyards that give rise to its famous wines, among them the Torrontés, stands Cafayate.