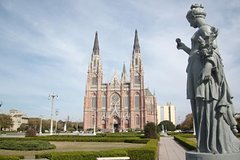 Just 1 hour away from Buenos Aires, the guided tour of the City of La Plata is a good way to learn more about Argentina and leaving the traditional tourist places.

Imposing neo-gothic cathedral, considered one of the largest in the world. Inspired by the famous European cathedrals, it was built in 1932.

Between 1950 and 1962 the Minor Planet Center accredited the discovery of 5 asteroids, which accredited with the name La Plata

It is an artistic complex that contains one of the most outstanding lyric rooms in Argentina.

the most important science museum in South America. Hosting a collection of more than 2 million objects and specimens, it is a large center of Paleontology, Anthropology, Geology, Botany and Zoology (didactic and educational museum of Argentine historical species). Learn more about the Argentine regions and their natural climates (sea, mountains, Patagonia etc), which made possible the good conservation of many dinosaur skeletons.