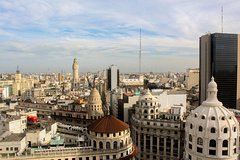 I want to show that we Argentines are more than tango, mate and good meat, I want to show that we have a young generation that is in charge of opening good restaurants, places to drink coffee where you open the door and the aroma takes you to sit and hang out, A generation of young people who took charge of making art and designing differently.
Usually travelers come to the city for a few days and, clearly if you are for a few days you want to see the 'must see' of this great city, but you would not like to see all that and also places, fairs or exhibitions that show you another side of Buenos Aires?
It is a huge and eclectic city, it is difficult to see everything. But I want to help each traveler enjoy their own way and time, but knowing that other face, that we are not just mate, tango and good meat.

This area is the nervous center of the city, where offices and office workers rush abound going nowhere, and everything happens around or in the vicinity of one of the most historic squares in the city, Plaza de Mayo. Microcentro is made up of 3 small neighborhoods that are covered on foot and that make up the historic center of the city, the neighborhood of San Telmo, Monserrat and San Nicolas.

When the city was founded in Recoleta, the aristocrats settled and built their homes imitating the houses of Paris, giving it a particular imprint. Nowadays many of these houses are no longer because buildings were built, but the neighborhood is still a great tourist attraction because of the cemetery and the huge artisan fair that is installed every weekend in the main square of the neighborhood, Plaza Francia .

Belgrano is a residential neighborhood where the stately homes and modern buildings coexist, so it is a place that invites you to walk, enjoy architecture, relax and finish the day in a cafeteria.

The mouth is a neighborhood that was formed around the port, and those who lived there painted their houses with the paint left over from the boats, which gave it its characteristic touch. Nowadays only a handful of streets keep the colors that make it a tourist focus, but it is always a nice option to enjoy the afternoon.