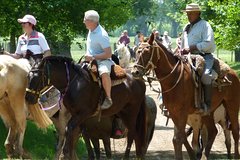 Take part of a full-day excursion from Buenos Aires to "El Ombu de Areco", an argentinian estancia located in the outskirts of the City. Have a chance to see the pampas (plains) as you drive to the ranch. Tour the village, visit an estancia, and enjoy live entertainment with a folklore show. This tour includes an asado barbecue, a professional guide and transportation.

Begin your 9-hour tour with a drive from your hotel in Buenos Aires to the village of San Antonio de Areco. Enjoy views of the pampas en route and listen to commentary about the area from your guide.

Paradores Draghi is the ideal corner for those who enjoy the cultural attractions offered by a place. There you will access a tour through the sumptuous space where you can see a vast collection of pieces of rural goldsmithing of the nineteenth century, which reveals the mysteries of a period of national identity consecration of the figure of the Gaucho as a main character of that time.

In Paradores Draghi begin your journey through history not only as a spectator, but also as a participant in the process of making exclusive goldsmith pieces that take shape through the hands of artisans recreating the techniques of traditional goldsmithing as their founder, Juan José Draghi, did in the 60s.

Located on Segundo Sombra Street, between Alsina and Arrellano. Don José Ruiz de Arellano founded the first oratory in the center of his stay. The foundation of this oratory was very important for the creation of the town. In the years 1720 and 1728, the first chapel was built, it was located a little more to the right than the current one. The foundation stone of the present church was placed on February 7, 1869 and was buried under the central entrance door. Inside it was placed a lead box containing the original records written on parchment, newspapers of the day, medals and coins of the time.

At the corner of Don Segundo Sombra and Zapiola streets, a peaked house rises from its peeling walls. This is the grocery & drinks store where peasants and country people who came to town to provide themselves and do errands to the cereal house, the store, the doctor, the bank, used to meet. Don Segundo Ramírez, the gaucho who was later a character in the novel by Ricardo Güiraldes, used to stop here. Nowadays, it continues to be a meeting place and has a long history of typical people from the countryside.

Make your way to the exclusive El Ombu de Areco Estancia. At this place, you will have a chance to take rides on horses or go for a ride in a carriage while enjoying some traditional cold cuts, cheeses and beverages. Then, you will enjoy a typical Argentinian barbeque of the finest meats. While you have dessert, you will be able to see a folklore show followed by a demonstration of gaucho skills.