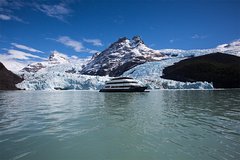 From the beginning, the trip has pleasant surprises, arriving at the Argentino Lake in the northwest, Punta Avellaneda and Boca del Diablo - the narrowest pass of the lake, with a width of approximately 800 meters. Spegazzini glacier and disembarkation at Puesto de Las Vacas - Baba del Canal Spegazzini - walk coordinated by our team of guides, with a view of the old Settlement Post. Recognition of flora and fauna. Visit to the Upsala canal, navigation to the Herminita Peninsula - limit allowed by National Parks - panoramic view of the glacier.

Lunch during the navigation.

The Spegazzini glacier is one of the glaciers bordering Argentina and Chile after the Agreement to specify the route of the limit from Mount Fitz Roy to Cerro Daudet in 1998. The lower section of the glacier is located in Argentina, in the Argentine Lake department of the province of Santa Cruz

During the whole tour you will be touring the Glacier National Park, you will be able to see the most important glaciers in the world in this guided tour and in this wonderful boat designed to navigate between glaciers.

The Perito Moreno National Park is located in the center west of the Province of Santa Cruz, in the Río Chico district 220 km northwest of the town of Gobernador Gregores. It has an area of 126,830 hectares belonging to the Estepa Patagónica ecoregions and the Patagonian Forests.

Lake Argentino is the largest and southernmost of the great Patagonian lakes of Argentina. It is located in the southwest sector of the province of Santa Cruz.

It has a main body and two long and irregular western arms, which are inside the Los Glaciares national park; they drain several glaciers, among which the Perito Moreno and the Upsala glacier stand out. On the south bank of the lake is the city of El Calafate, the most usual tourist base for the exploration of the region.

The Seco glacier is a glacier located in the Los Glaciares National Park, Province of Santa Cruz, Argentina. It has an area of 4 km², and its outstanding point is to be in a period of retreat, so you can see the tongue of land eroded in earlier times, when drained into the Spegazzini arm of Lake Argentino. This characteristic is what gives it its name, although it is also known as Totalizador, because it is a totalizing pluvionivometer of the Instituto Nacional del Hielo Continental Patagonico; said totalizer averages between 1500 and 1800 mm of annual precipitation.

The Perito Moreno glacier is a thick mass of ice located in the Lago Argentino department of the province of Santa Cruz, in southwestern Argentina, in the Patagonia region. It is integrated into the Los Glaciares National Park. This glacier originates in the Southern Patagonian ice field.

This glacier is one of several Patagonian glaciers that increases any of the three constitution hypotheses: degrowth, accretion, and equilibrium, are still being debated by glaciologists.1 2 The glacier advance front has 5 kilometers (3 mi) wide, with an average height of 74 meters (240 feet) above Lake Argentino. The total depth of the ice is 170 meters (558 feet).

The Upsala is a Patagonian glacier that drains into Lake Argentino and has its sources on the eastern slope of the Southern Patagonian ice field. The glacier is located in the territory of Los Glaciares National Park in the province of Santa Cruz in Argentina.

Rios de Hielo Express, Unmissable navigation that allows you to see glaciers only accessible by catamaran

The Onelli Glacier is a glacier located in the Los Glaciares National Park, Province of Santa Cruz, Argentina. The glacier drains into Lake Argentino and more specifically at Onelli Bay. The Onelli glacier is in recession, like the rest of the field, except Perito Moreno.