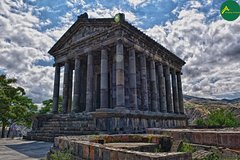 We offer a wonderful excursion to the famous Garni Pagan Temple,Geghard Monastery,Ropeway in Tsaghkadzor and The Great Lake Sevan with the Sevanavank Monastery on a new and comfortable Mercedes-benz cars and exlusive services

Amaze Yourself
Your comfort is our main priority

The pagan temple Garni was built in the 1st century BC, which was destroyed by an earthquake and was built with difficulty in Soviet Union times.Temple surrounded by a beautiful garden, an ancient baths, the ruins of the castle and massive ridges.

Stop At: The Monastery of Geghard, Geghard Armenia

Geghard Monastery is one of the oldest Monasteries in the world, which is included in the UNESCO World Heritage List and where located the Spear of Destiny, or Longin's Spear, which according to many leading scholars, is one of the originals,that was found.The Monastery is built in the rock, has many interesting halls and surrounded by amazing nature and rocks.

Tsakhkadzor resort is the center of winter tourism in Armenia, where is also going lots of winter events and championships.Further on the mountainside there is a ropeway and many other attractions.

Stop At: Monastery Sevanavank, next the Holy Mother of God Church, Sevan Armenia

Lake Sevan is the largest lake in the Caucasus. On the peninsula is the ancient Sevanavank Monastery and on the shore are lots of restaurants,where you can taste the famous Sevan's fish.