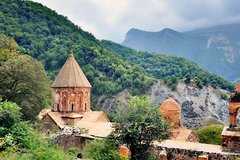 Start From Yerevan Visit the region of Nagorno-Karabagh Before Crossing into Nagorno-Karabagh. After a Stay overnight in Stepanakert, explore the city Stop in Amaras, Shushi, Tigranakert, and More as you Explore this Region.

Stop At: Statue of Akhtamar at Lake Sevan, along the highway, north of Sevanavank, Sevan Armenia
stop at :The tour begins by climbing a flight of stairs to the Sevan peninsula  a pleasant morning work-out that will compensate itself with an unforgettable panoramic view of the lake from the top. We will also visit the monastery of Sevanavank, built by the princess Mariam to honor the life of her deceased husband in the 9th century. Duration:1h Stop At: Stepanakert Stepanakert is the capital of Nagorno-Karabakh. It is situated on the Western incline of Karabakh mountain range, on the left bank of the tributary of the Karkar River Vararakn, . Stepanakert has an antiquated history. In the Middle Ages, at the place of present-day The modern blooming city Stepanakert encompassed by the mountains.Duration:1h

Stop At: Gandzasar Monastery, The monastery at Gandzasar was first mentioned in the tenth century.[4][5] The construction of Gandzasar's Cathedral of St. John the Baptist began in 1216, under the patronage of the Armenian prince of Khachen, Hasan-Jalal Dawla, and it was completed in 1238 and consecrated on July 22, 1240. Duration:1h
Duration: 2 hours

Stop At: Armenian Genocide Museum, Tsitsernakaberd Hwy, Yerevan 0028 Armenia
stop at : shushi In Shushi we will visit Surp Amenaprkich Ghazanchetsots Cathedral (St. Savior Ghazanchetsots Cathedral), which was built in 1868-1887. It is considered to be the second most important spiritual center in Artsakh. The church was built by the local residents. The consecration of the church took place on September 20, in 1888 Duration:1h stop at : Amaras Monastery, which is one of the oldest Christian sites in Nagorno-Karabakh. According to the 5th-century chronicler Faustus Byuzand, at the start of the 4th century St. Gregory the Illuminator founded a church in what was to become Amaras Monastery. At the beginning of the 5th century Mesrop Mashtots, the inventor of the Armenian Alphabet, Duration:30min stop at :Tigranakert (Armenian: Արցախի Տիգրանակերտ, Arts'akhi Tigranakert) is a ruined Armenian city dating back to the Hellenistic period. It is one of several former cities in the Armenian plateau with the same name, named in honor of the Armenian king Tigranes the Great (r. 9555 B.C.),[1][2] although some scholars, such as Robert Hewsen and Babken Harutyunyan, have posited that this particular Tigranakert may have been founded by Tigranes the Great's father, Tigranes I (r. ca. 12395 B.C.).[3] Duration:1h

Stop At: Armenian Genocide Museum, Tsitsernakaberd Hwy, Yerevan 0028 Armenia
stop at : dadywank Dadivank Monastery, which is the largest monastic complex in Artsakh-Karabakh and one of the true masterpieces of Armenian medieval architecture. It is located in the northwestern part of Martakert district of the Nagorno Karabakh Republic Duration:1h STOP AT ; Karahunj One of the most mystical spots on our planet, which is around 2500 years older than the world famous Stonehenge and is yet to be explored.

A waterfall with a height of 18 m. located in Syunik Province

Stop At: Old Khndzoresk large number of caves, although most of them are rather small. You will see that many of the caves have been carved out by man.Duration:1h Stop At: Khndzoresk Swinging Bridge :The swinging bridge and has 160 meters long, wide and rises 36 meters above the ground.1h

STOP AT;: tatev monastery Tatev Monastery is located in South-East Armenia, in the area of ancient Armenian Syunik, not far from the city of Goris and 280 km away from Yerevan. The Tatev plateau has been in use since pre-Christian times, hosting a pagan temple. The temple was replaced with a modest church following the Christianization of Armenia in the 4th century.[6] Duration:1h

Stop At: Hin Areni Winery, A winery famous with its exceptional wine, made from the oldest grape varieties. Duration:1h Stop At: Noravank Monastery, One of the gems of medieval Armenian architecture, nestled high among the stunning brick-red cliffs. Stop At: T'rchuneri (Bird) Cave, Areni, where archaeologists discovered several of the worlds oldest artifacts, including a leather shoe and a winery. Duration:30min

stop at : khor virap A monastery which offers an amazing view of Armenias defining symbol  the majestic mount Ararat. Duration:30min