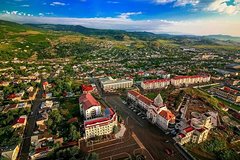 The Republic of Artsakh (Nagorno-Karabakh) is an Unrecognized Country in the South Caucasus Region. It borders Armenia, Iran and Azerbaijan.

Making a few stops along the coast, including a visit to an ancient monastery, and a tasting of locally produced cheeses and a typical countryside lunch

Next well journey to mountainous Karvachar, the most scenic region of Artsakh

As we move onward, well charge the medieval fortress of Andaberd, then bathe in the hot springs of a wild gorge

At the end of the day, well enjoy dinner

The night will be spent at the house of a local skilled craftsman and our good friend, Martiros Chalumyan.
Duration: 8 hours

We will stop at the monastery of Dadivank, an ancient Christian shrine of Eastern Armenia

Around midday, well visit an eclectic village called Vank, then take a short climb up to the monastery of Gandzasar

After lunch, we will head to the capital and check into a guest house

Once in Stepanakert, well walk through the gorge of the Karkar River to an abandoned village of millers

There well swim under waterfalls before returning to the guest house for dinner and a tasting of wine and vodka.

Our host will be a genuine winemaker-cum-alchemist.
Duration: 8 hours

Stop At: Shushi Tank Memorial, M12, Shusha 5800 Azerbaijan
The first part of the day we will spend in the city and exploring the local bazaar (market)

Then, well travel to the Hadrut province, which was once the historical region of Dizaq

The main adventure of the day is the ascent to Toghasar mountain. At the mountain top stands the medieval temple of Gtich Monastery

After descending to the bottom, well have lunch with locals

After lunch we will explore the village of Togh, the historical center of Dizaq and home to the winery of the Avetisyan family

Here, well taste Kataro, one of Armenias finest wines made from the indigenous khindogny variety of grapes

On the way back to Stepanakert, well stop to visit one of the planets oldest trees, a 2000-year-old sycamore
Duration: 8 hours

Stop At: Goris, Goris, Syunik Province
Before noon, well visit the old capital of Artsakh, the Shushi stronghold, with charming locals as our guides

Well tour the old quarters and fortress walls of the city, and even visit the local rug museum

After lunch, we will leave Artsakh via the Lachin strip which was fiercely fought for

Along the way well explore the famous cave-city of Khndzoresk, and take the longest single-span aerial tramway in the world to the medieval monastery of Tatev

Well spend the night at a hotel in a town named Goris
Duration: 8 hours

On the way, well stop at Karahunj, a megalithic and ancient observatory

Next, well descend into the winemaking region of Areni, where well walk through a red-cliffed canyon towards the medieval monastery of Noravank

There, well enjoy a homemade lunch in a cave tavern before descending further into the Ararat Valley

In the afternoon, we will visit Khor-Virap Monastery, a prominent Christian shrine that offers a classic view of Mt. Ararat

After gazing upon the mountain, well return to Yerevan in the evening