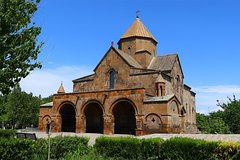 Today we will visit the religious center of Armenia - Saint Echmiadzin. In 301 Armenia adopted Christianity as the state religion. In the same year, the construction of the first Christian Church of St. Echmiadzin began. Echmiadzin translates as the place of descent of the only begotten. According to the legend, the God himself indicated the place of the first Christian Church to Gregory the Illuminator with a fire hammer. Over time, parishioners are becoming more and more, and the Church is being rebuilt until the XX century. Echmiadzin is a religious town, on the territory of which you can see a theological Seminary, a refectory, monastic cells, a library (book Depository), a lot of khachkars, a baptistery and the residence of the Armenian Catholicos.

St. Gayane church in Etchmiadzin is part of the Etchmiadzin Monastery. Gayane is the abbess of virgins preaching Christianity who fled from Rome and was painfully killed by order of the Armenian king Trdat III. Her agonizing death occurred in this place. The church built in the 7th century has the appearance of a basilica with central dome and is one of the unique architectural monuments of Armenia. There is a necropolis on the western side of the church where representatives of the higher clergy of Armenia are buried. St. Gayane church has been included in UNESCO World Heritage List.

The Church of St. Hripsime was built in honor of her Christian mentor - St. Gayane. The temple was built in 630 on the site of the chapel of the IV century.

Located 5 km from Echmiadzin is one of the brightest landmarkst of medieval Armenian architecture the magnificent Zvartnots Temple constructed in the 7-th century. Unfortunately, Zvartnots has survived only in ruins since it was completely destroyed by powerful earthquake in the 10 th century. But even the ruins of this temple give us the idea of its rare and majestic beauty.
The construction of Zvartnots Temple (the Temple of Watching Forces) began in 641-643 and intermittently continued for twenty years until 652.
The ruins of Zvartnots Temple are designated by UNESCO as World Heritage Site.