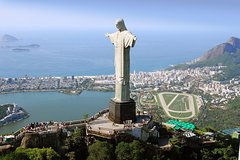 The 2-Day Tour of Rio de Janeiro will amaze you not only with the natural and cultural attractions, but also the beaches and islands of the Wonderful City. All these places are internationally recognized for their beauty and history.

The Tour includes the following activities:

Angra dos Reis and Ilha Grande Day Trip, which will take you to the Lagoa Azul, Araçá Beach, Gipóia Island and includes Lunch on the Island of Gipóia.

Pass By: Av. Pres. Castelo Branco, Portao 3 Portao 3 - Maracana, Rio de Janeiro, State of Rio de Janeiro 20271-130 Brazil
Location where the statue of Christ the Redeemer is located, one of the seven wonders of the modern world.

Stage of the presentations of the Samba Schools in the Carnival of Rio de Janeiro.

The beaches of the most famous neighborhoods of Rio de Janeiro, which gathers charms of all kinds.

Meals included:
• Lunch: Lunch will be at Faenza, one of the most prestigious steakhouses in Rio de Janeiro
No accommodation included on this day.

Stop At: Lagoa Azul, Angra Dos Reis, Ilha Grande, State of Rio de Janeiro Brazil
a natural aquarium where you'll find one of the finest diving spots on Ilha Grande. A massive pool with clear water, where the bottom is a live sea star collection, combined with shoals of colorful fish, squids, and corals. Don't forget to bring your bathing suit.
Duration: 40 minutes

Pass By: Praia de Araça, Freguesia de Santana, Angra dos Reis - RJ, Brazil
Cozy beach with calm, clear waters and a peculiar formation, is one of the beaches that does not receive so much visitation of tourists because it is a small beach and often goes unnoticed by those who pass by boat.

Stop At: Gipoia Island, Proximo a Vila Velha e a Ilha da Piedade Corredor Turistico da Ponta Leste, Angra Dos Reis, State of Rio de Janeiro Brazil
It is the second largest island in the bay of Angra, we will make our last stop at Vitorino Beach, where a sardine canning factory operated until 1967 and nowadays it has become a restaurant where we will have lunch, a great option for children and the elderly take a refreshing sea bath.
Duration: 1 hour

Pass By: Botinas Island, Corredor Turistico da Ponta Leste, Angra Dos Reis, State of Rio de Janeiro Brazil
In the Botina Islands we will only make stops for photo, on the spot diving is not allowed. Also known as Twin Islands is the main postcard of the city of Angra dos Reis. Its main attractions are the incredibly clear waters and white sands.