ANCIENT RIVER - Walk through the HISTORIC CENTER with professional guide 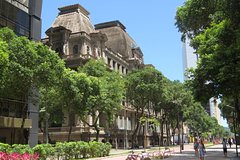 ANCIENT RIVER - Walk through the HISTORIC CENTER with professional guide

The historical center of Rio de Janeiro is surrounded by ancient roads and buildings that illustrate important sections of the history of Brazil from the imperial period to the republic.

The visitor walking along Rio Branco Avenue, passing through Largo da Carioca, Cinelândia, returning and picking up the Ouvidor to Rua Primeiro de Março and exploring many other routes, will find museums, cultural centers and public places where Machadian works and characters live. represented the meeting point of intellectuals until the middle of the 20th century.

Inaugurated in 1909 during the city hall of Pereira Passos as part of the architectural complex of the redevelopment works of Rio de Janeiro and opening of the Central Avenue, since its inauguration it has played an important role for the Carioca and national culture, receiving on its stage important artists, orchestras and ballet companies.

The National Museum of Fine Arts (MNBA) is an art museum located in the city of Rio de Janeiro, Brazil. It is one of the most important museums of its kind in the country.

Although the museum was officially created only on January 13, 1937 - and inaugurated on August 19, 1938 - its history is much older, and dates back to the arrival of the Portuguese royal family in Rio de Janeiro in 1808, since Dom João VI was accompanied by a set of works of art, some of which remained in the country after its return to Europe and figure as the initial nucleus of the collection

The Convent of St. Anthony is a Catholic monastery belonging to the Franciscan Province of the Immaculate Conception of Brazil located at the top of the Morro de Santo Antônio and facing Largo da Carioca, in the city center of Rio de Janeiro, Brazil. The convent forms, along with the neighboring Church of the Third Order of St. Francis of Penance, one of the oldest and most important colonial remains of the city.

Arco do Teles is located in Praça XV de Novembro, in the city center of Rio de Janeiro, Brazil.

Architectural landmark in the history of the city, is what remains of the former residence of the family Telles de Menezes, it connects the XV Square to the Travessa do Comércio.

The Church of Our Lady of Candelaria is a Catholic temple located in the Center of the city of Rio de Janeiro, Brazil. It is one of the main religious monuments of the city, the traditional stage of weddings of the Carioca society.

The church had its name associated to two remarkable events of the second half of the XX century: the Candelaria Concio in the Diretas Já movement and the Candelária Chacina, [1] [2] a massacre of street dwellers occurred in the vicinity of the church in dawn of July 23, 1993 and had an international repercussion.

The kinetic sculpture of the American artist Anthony Howe, who moves with the wind, caught the eye.

Special Offer - Book by February 15 to save 10% off our previously offered price! - Book Now!