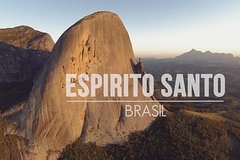 Visiting the Capixabas Mountains and the Immigrants Region revealed a totally new Holy Spirit, with a lot of influence from European immigration in architecture, gastronomy and culture. Although they are different tourist regions, we think that combining the regions of the Capixaba and Immigrant Mountains in the same itinerary would be perfect.

And we were not wrong. Combined, these charming parts of Espírito Santo bring a romantic travel itinerary full of charm, with accommodations, restaurants, services and unforgettable experiences. Destinations such as Santa Teresa, Santa Leopoldina, Domingos Martins, Lagarto Route, Pedra Azul and Venda Nova do Imigrante were all part of this charming travel itinerary.

Arriving in the city of Sundays Martins we will visit the central square of the city where we will visit the 1st Lutheran Church with tower built in Brazil and the former imperial hotel where D Pedro ll stayed and the monument in honor of Italian immigrants. and typical products of the region and then we go to leisure street

In Pedra Azul we will make the Largato Route with several attractions and stops for photos and appreciation of the region.

Venda Nova do Imigrante known as the agrotourism capital in Brazil there we will know some properties and products for tasting of the region such as coffee, cheese, craft beer, wines, cachaça, socol, strawberries, and orchids and much more.