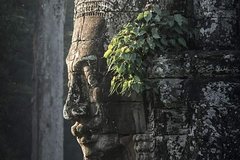 For two decades, in the second portion of the tenth century, Koh Ker was an ancient capital city in the Khmer empire during the reign of the king Jayavarman IV. Almost all monuments in the huge temple town - the second largest in Cambodia besides of the Yaśodharapura (Khmer: យសោធរបុរៈ, present-day Angkor.

Pick up from the hotel at 8: 30 am with our professional tour guide and driver. a quick stop at the ticket booth. After a short stop, we start on the air-conditioner vehicle toward Angkor Wat temple to learn about its history as the world's largest religious monument in the world. It's the Hindu and Buddhist architecture that took 30 years to build. Follow your guide to briefly more detail about sandstone gallery talking about.

From Angkor Wat to the head north toward Angkor Thom, it is 10 minutes. This majestic site once served as the Khmer Empire capital city. Take a moment to consider the magnificent state temple call Bayon temple or Smiling temple. which is the last temple of the powerful king's Jayavarman VII to reserve for himself and Mahayana Buddism.

Enjoy the lunch time by your own expense next to the ruined temple, and then visit the mother temple call Ta Prohm or tomb raider to derive the Hollywood film by Angelina Jolie. The temple set in the midst of the jungle, ramble the maze-like ruins of this ornate worship site, marveling at the fig trees that threaten to overtake the edifice. Absorb a late evening breeze and enjoy the peaceful, rural atmosphere before heading back to your hotel.
Duration: 10 hours

Stop At: Banteay Srei, Siem Reap Cambodia
With just one day to explore the UNESCO-listed temples of Angkor, the Grand Circuit is the most comprehensive route available. As well as seeing star attractions such as Angkor Wat and Bayon Temple, youll stop at temples including Pre Rup, Preah Khan, and Neak Pean, and visit the more remote Banteay Srei temple. End the day watching the magnificent sunset over Angkor Wat at Bakeng Mountain.
• Discover the wonder of ancient Angkor, the largest religious with our one-big tour. Our experienced tour guide shares the incredible history of these ancient monuments. You will be visite temples, which throughout a big tour such as Preah Khan temple, Neak Pean temple, Ta Som, Ta Keo temple, Pre Rup temple
• Some temples were built throughout Jayatataka. The Jayatataka is the baray that was built by the king Jayavarman VII, the greatest of the monarchs of the Khmer Empire. The Neak Pean in the center of the Jayatataka was a place of healing for pilgrims in the times of the Angkor Civilization.
Duration: 10 hours

Stop At: Beng Mealea, 40 km east of Angkor Wat Cambodia
The tour has to start at 8: 00 am, directly to the ancient capital city. Koh Ker is a remote archaeological site in northern Cambodia about 120 kilometers away from Siem Reap and the ancient site of Angkor, It is a jungle filled region that is sparsely populated. More than 180 sanctuaries were found in a protected area of 81 square kilometers. The ancient city was built by the king Jayavarman VI, who has ruled from 928 to 941. We'll visit the temples such as Prasat Thom( the Pyramid Tempe ) Prasat Pram, Prasat Neang Kmao, and Prasat Chen. After the temples, we'll have lunch at the local restaurant.

At noontime, we are back on the same way to visit Beng Melea temple.

A spectacular sight to behold, Beng Mealea, is one of the most mysterious temples at Angkor, as nature has well and truly run riot. Exploring this titanic of temples, built to the same floor plan as Angkor Wat, is the ultimate Indiana Jones experience.

Discover the wonder of ancient quarry the stone O Thmor Dap (The place that we have quarried the stone to build temple)
Duration: 12 hours