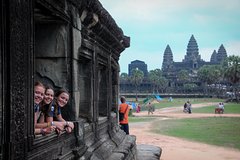 Experience all the excitement that Cambodian culture has to offer with a journey to its most iconic spots within 4 days. Explore the ancient capital city of the Khmer Empire and learn the history of Angkor. Allow at least two hours for each visit to the Angkor Wat temple with our knowledgeable tour guide.

Stop At: Angkor Thom South Gate, Siem Reap Cambodia
Our tour guide will meet you at 8:00 am in the hotel lobby and we will drive you to purchase the Angkor ticket before heading to the Angkor Thom(Angkor Thom.
Duration: 30 minutes

Stop At: Angkor Wat, Sangkat Nokor Thum, Siem Reap Cambodia
After you've finished your lunch, we continue to explore the Angkor Wat is a temple complex in Cambodia and is the largest religious monument in the world, on a site measuring 162.6 hectares.
Duration: 1 hour 30 minutes

Stop At: Phnom Bakheng, Angkor Archaeological Park, Siem Reap 17000 Cambodia
If you are not too exhausted and the weather is good, we will take you to see the sunset at Phnom Bakheng mountain before heading back to your hotel.
Duration: 2 hours

Stop At: Angkor National Museum, 968 Vithei Charles de Gaulle Blvd Khrum 6, Siem Reap Cambodia
Please let our local guide pick you up from your hotel to at 9:00 am to visit Angkor National Museum is an archaeological museum dedicated to the collection, preservation and presentation of Angkorian artifacts, also to provides information and education about art and culture of Khmer civilization, with collections mainly dated from Khmer Empire's Angkor period circa 9th to 14th-century.
Duration: 1 hour

Stop At: Angkor Silk Farm, Airport Road Puok District, Siem Reap 17259 Cambodia
If you ever happen to be in the Siem Reap Province, do not hesitate get your head out of the temples and their exhausting rambling and take a chance to discover the beauty of Cambodias countryside. A good way to do it is to drop by the Angkor Silk Farm, located just 20 minutes from Siem Reap downtown.

This part of the well-known National Road 6 is quite peaceful and offers a refreshing sight of the Cambodian lush scenery. Whether you are in a tuk-tuk, a car or on a motorbike, do not miss the view of the vast and green paddy fields, the traditional stilted wooden houses, under the gaze of dozens of cows that may sometimes cross the road just in front of you!
While at the Angkor Silk Farm, you will find out a hidden treasure: a delightful quiet place surrounded by five hectares of mulberry trees plantations where the whole traditional process which gives birth to silk is displayed and explained.
Duration: 45 minutes

Stop At: Wat Athvear Temple, Siem Reap Cambodia
This tour will bring you to visit a Buddhist pagoda called Wat Athvear and have a water blessing from local monk.
Duration: 35 minutes

Stop At: Wat Thmey (Killing Fields), Siem Reap Cambodia
A visit to Wat Thmey is recommended to all travellers who are interested in learning about the tragic destiny of millions of Cambodians who vanished under the Khmer Rouge. Wat Thmey is also known as Siem Reaps Killing Fields with a pagoda and a memorial stupa reminding of the events between 1975 and 1979.

Under Pol Pots regime, the pagoda served as a prison. Many innocent people were kept and tortured here until they confessed a crime they did not commit. They were then killed and buried nearby. Some of the remains of these victims have been exhumed and placed in the memorial stupa near the pagoda. Together with photos, they share bone-chilling insights into the atrocities committed by the Khmer Rouge.

While the memorial is significantly smaller in scale compared to the memorial in the Tuol Sleng (S21) Prison and Choeung Ek killing fields in Cambodias capital, it still serves as an important reminder for all local Cambodians living in the area.

Today, the pagoda serves again as a monastery. There is also an orphanage and school. Despite its dark past, the laughter of the children and the sounds of daily Cambodian life in the background prove that the people living in this area are leaving the dark past behind and move forward.

Stop At: Angkor Wat, Sangkat Nokor Thum, Siem Reap Cambodia
Please ask your hotel staff to prepare a takeaway breakfast before we embark on the sunrise tour as we will not come back to the hotel until we finish with the temple tour. Our tour guide will come and pick you at 4:40 am and head straight to the remarkable Angkor Wat temple to watch the stunning sunrise. Sometimes we would miss the sunrise during the monsoon season from June to November due to the weather. Your tour guide will help to find the best site and you can enjoy breakfast after sunrise.
Duration: 1 hour

Stop At: Ta Prohm Temple, Angkor Archaeological Park, Siem Reap 21000 Cambodia
After a quick breakfast, We should move to Ta Prohm temple before 9:00 am because it will be very crowded and noisy especially during the high tourist season.
Ta Prohm is the modern name of the temple at Angkor, Siem Reap Province, Cambodia, built in the Bayon style largely in the late 12th and early 13th centuries and originally called Rajavihara
Duration: 1 hour

Stop At: Pre Rup, Siem Reap Cambodia
Pre Rup is a Hindu temple at Angkor, Cambodia, built as the state temple of Khmer king Rajendravarman and dedicated in 961 or early 962. It is a temple mountain of combined brick, laterite and sandstone construction.
Duration: 35 minutes

Stop At: Preah Khan, Angkor Wat, Siem Reap Cambodia
Preah Khan is a temple at Angkor, Cambodia, built in the 12th century for King Jayavarman VII to honor his father. It is located northeast of Angkor Thom and just west of the Jayatataka baray, with which it was associated. It was the centre of a substantial organisation, with almost 100,000 officials and servants.
Duration: 1 hour

Stop At: Ta Som, Angkor Archaeological Park Cambodia
Ta Som is a small temple at Angkor, Cambodia, built at the end of the 12th century for King Jayavarman VII. It is located north east of Angkor Thom and just east of Neak Pean. The King dedicated the temple to his father Dharanindravarman II who was King of the Khmer Empire from 1150 to 1160
Duration: 25 minutes

Stop At: Neak Pean, Angkor Wat, Siem Reap Cambodia
Neak Pean at Angkor, Cambodia is an artificial island with a Buddhist temple on a circular island in Jayatataka Baray, which was associated with Preah Khan temple, built during the reign of King Jayavarman VII
Duration: 20 minutes

Stop At: Phnom Kulen National Park, Cambodia
Your tour guide will meet you at 8:00 am or we can meet you any time before 9:30 am due to the distance of the journey. Before we go up to Phnom Kulen mountain, we have to take you to buy the entrance ticket of National Park. On the way, we will drive through the rural villages before reaching the most mystical mountain in Cambodia, Phnom Kulen mountain. It takes about 1 hour and a half from Siem Reap town to the mountain. This mountain is the birthplace of the ancient Khmer Empire and it was one of the oldest capital cities of Angkor. What we can see on the mountain is the source of water of SIEM REAP river which is commonly known as River of a thousand lings because there are about one thousand Shiva Lings carving in the river under the surface of the water from the early of ninth-century and the water in this river is considered holy and belief that it can wash away sin from our body.

After visiting the waterfall, we will walk up to a 16th-century Buddhist monastery name Wat Preah Ang Thom where we can see Cambodias largest 16th century reclining Buddha statue. We will leave from Phnom Kulen Mountain to Banteay Srei temple around midday and lunch.
Duration: 2 hours

Stop At: Angkor Archaeological Park, Taphul, Siem Reap Cambodia
We will have a lunch break for about 60 minutes before going to our next temple. You will have to pay for food and beverage by yourself.
Duration: 1 hour

Stop At: Banteay Srei, Siem Reap Cambodia
Banteay Srei or Banteay Srey is a 10th-century Cambodian temple dedicated to the Hindu god Shiva. Located in the area of Angkor, it lies near the hill of Phnom Dei, 25 km north-east of the main group of temples that once belonged to the medieval capitals of Yasodharapura and Angkor Thom.
Duration: 45 minutes

Tonle Sap is a seasonally inundated freshwater lake, the Tonlé Sap Lake and an attached river, the 120 km long Tonlé Sap River, that connects the lake to the Mekong River.
Duration: 50 minutes