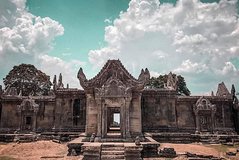 We will start to pick up our customers from the hotel at 6:00 am and we will departure from siem reap at 7:00am.

We will first explore the Preah Vihea temple first and after that Koh ker temple then it is the lunch time at the local restaurant. After we finish our lunch we will keep going on to Beng Mealea we will reach there around at 2:30pm. So it is the time for exploring the Beng Mealea.

After we finish from hotel so the driver to visit the Preah Vihea temple first .
Peah Vihear Temple is a Khmer temple situated atop a 525-metre (1,722 ft) cliff in the Dangrek Mountains, in the Preah Vihear province of northern Cambodia and on the border of Kantharalak district (amphoe) in Sisaket province of eastern Thailand. In 1962, following a lengthy dispute between Thailand and Cambodia over ownership, a majority of the International Court of Justice (ICJ) in The Hague awarded the temple to Cambodia.
Affording a view for many kilometers across a plain, Prasat Preah Vihear has the most spectacular setting of all the temples built during the six-centuries-long Khmer Empire. As a key edifice of the empire's spiritual life, it was supported and modified by successive kings and so bears elements of several architectural styles. Preah Vihear is unusual among Khmer temples in being constructed along a long north-south axis, rather than having the conventional rectangular plan with orientation toward the east. The temple gives its name to Cambodia's Preah Vihear province, in which it is now located, as well as the Khao Phra Wihan National Park which borders it in Thailand's Sisaket province and through which the temple is most easily accessible. On July 7, 2008, Preah Vihear was listed as a UNESCO World Heritage Site.

After we finish our tour at Preah Vihear temple we turn to back to Koh Ker temple but we start to visit so we will break for lunch at local restaurant at your own account.

Koh Ker Group located more than150 km northeast of Siem Reap town in the province of Preah Vihear, it was briefly the capital of the Khmer empire between 928 and 944 under king Jayavarman IV and his son Hasavaraman II. After the Khmer empire had been established in the Angkor area (Roluos), Jayavarman IV moved the capital in 928 almost 100km northeast to Koh Ker. Here a vast number of temples were built under his reign, until his successor returned to the Angkor area about twenty years later.
The Koh Ker site is dominated by Prasat Thom, a 30 meter tall temple mountain raising high above the plain and the surrounding forest. Great views await the visitor at the end of an adventurous climb. Garuda, carved into the stone blocks, still guard the very top, although they are partially covered now.
Across the site of Koh Ker there are many prasat or tower sanctuaries. A couple still feature an enormous linga on a yoni that provides space for several people. The outlet for the water that was sanctified by running it over the Linga can be seen in the outside wall of one of them. In other cases, three prasat stand next to each other, dedicated to Brahma, Shiva and Vishnu. Most of them are surrounded by libraries and enclosures, many also had moats. At that time, the roofs were still made of wood. Today, only the holes for the beams remain in the stone structures.
Visiting Koh Ker Group can be included in visiting Beng Mealea.

The last stop before we return back to the hotel so we will spend around 1hour and 30 minutes to visit Beng Mealea temple.

Beng Mealea Temple (its name means "lotus pond") is nearly 80km from Siem Reap town at the foot of Kulen Mountain. It was built as Hinduist temple, but there are some carvings depicting Buddhist motifs. Its primary material is sandstone and it is largely unrestored, with trees and thick brush thriving amidst its towers and courtyards and many of its stones lying in great heaps. For years it was difficult to reach, but a road recently built to the temple complex of Koh Ker passes Beng Mealea and more visitors are coming to the site.
Built in the 12th Century, many scholars believe it was the model for Angkor Wat. It is just as wonderful of a temple but it is still largely lost in the jungle.
The accommodations made for tourists at Angkor Wat and Angkor Thom have not been made here, and visitors enjoy a much quieter and adventurous experience

Special Offer - Book by March 5 to save 20% off our previously offered price! - Book Now!