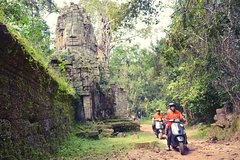 As the stunning temples of Angkor get busier with tourists, buses, cars and tuk tuks the magic seems to be declining. Our Vespa Tour of Angkor is fast emerging as the most original and exciting way to dodge the crowds and enjoy Angkor  the way it deserves to be experienced!

Angkor Wat, the largest and most complete structure, and the only one of Angkor's temples that has its entrance facing west, the largest Hinduism in the world history.

A small Hindu temple located in the Angkor complex,It is dedicated to Lord Shiva and used to hold a golden image of him. The temple can be seen on the left side when entering Angkor Thom at the southern gate.

Temples that located at each corner of the Angkor Thom, on the earth embankment that reaches almost to the top of the walls, is a small temple known as Prasat Chrung (Shrine of the Angle) in modern Khmer.

Bayon is a richly decorated Khmer temple at Angkor in Cambodia. Built in the late 12th or early 13th century as the state temple of the Mahayana Buddhist King Jayavarman VII, stands at the center of Jayavarman's capital, it was modified and augmented by later Hindu and Theravada Buddhist kings in accordance with their own religious preferences.

Unlike most Angkorian temples, Ta Prohm is in much the same condition in which it was found: the photogenic and atmospheric combination of trees growing out of the ruins and the jungle surroundings have made it one of Angkor's most popular temples with visitors.