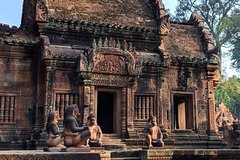 Besides Angkor Wat and other high profile temples around Siem Reap, venture into the Cambodian jungle without the hassle of large tour group and visit the majestic temple of Banteay Srei, along with secluded Beng Mealea temple. Experience the unique Kampong Phluk floating village, and relax under the gorgeous sunset view at Tonle Sap lake at the end of the tour.

Banteay Srei is built largely of red sandstone, perfect for the elaborate decorative wall carvings which are still observable today. The temple extremely popular with tourists and is widely praised as a "precious gem", or the "jewel of Khmer art." The temple's modern name, Banteay Srei ("citadel of the women") is probably related to the intricacy of the bas-relief carvings found on the walls and the tiny dimensions of the buildings themselves.

It was built as a Hindu temple, but with some carvings depicting buddhist motifs. It is largely unrestored, with trees and thick brush thriving amidst its towers and heaps of stones. For years it was difficult to reach, but a road recently built made it easier for more visitors to come.

Koh Ker is a very special temple, with the shape of a 7-tiered pyramid that is unique among the Angkor Wat ruins. Koh Ker was briefly the capital of the whole Khmer empire (928944 AD). It is located in a jungle filled region that is sparsely populated, where more than 180 sanctuaries were found. Only about two dozen monuments can be visited by tourists because most of the sanctuaries are hidden in the forest.

This is the second largest structure at Koh Ker area, named for its red bricks structure. Although none of the carved stone lions remains to be seen, stone archways, galleries, and a series of sanctuaries and ponds are still visible.

A rural village consisted of traditional stilted houses, Kampong Phluk is a unique place to experience the fishing culture around Tonle Sap lake. The name means "Harbor of the Tusks". The community largely depends on fishing for survival, spending Cambodia's wet season fishing. Some floating villages around Tonle Sap lake have become tourist scams and commercial traps (such as Chong Kneas), yet Kampong Phluk remained untouched and is highly recommended to people who loves culture and photography.

Passing through a long river bed, we enter the Tonle Sap lake, a seasonally inundated lake that is connected to the Mekong River. As one of the world's most varied and productive ecosystems the region has always been of central importance for Cambodia's food supply. It proved capable of largely maintaining the Angkorean civilization, the largest pre-industrial settlement complex in world history. If you come in afternoon, you will be able to enjoy fantastic sunset view on the lake.

Roluos was once the first capital of Khmer Empire until the capital was moved to Bakheng in 905. The Roluos group, dating from the late 9th century, is the earliest site of the 600 years Angkor Period that is open to visitors.