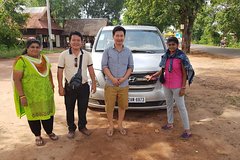 Explore Angkor at the hand of a professional tour guide who is grateful to welcome you to the Kingdom of Wonder. See Siem Reap, the home of the world heritage site and the center of the former Khmer Empire. With our expertise, learn about our ancient heritage, the temples and so many more magical experiences and sights that Cambodia has to offer.

Stop At: Angkor Wat, Sangkat Nokor Thum, Siem Reap Cambodia
Morning: After breakfast at the hotel we start a discovery tour to see ANGKOR WAT TEMPLE, which is the largest and 7th finest wonder of the world heritage by UNESCO. Angkor Wat is one of the Seventh Wonder of the World. Angkor Wat, the largest temples in the world, with a volume of stone equaling that of the Cheops Pyramid in Egypt. The temples of Angkor built from AD 1113  1150. Next stop, we continue drive to see TA PROHM TEMPLE (Known as Tomb Raider, where the Tomb Raider movie of Hollywood made). Ta Prohm is the beautiful ruin which is overgrown by the giant trees of the jungle, and because of its wonderful atmosphere it was left un-renovated.

Noon: Take a break for lunch in a local restaurant near the temple area.

Afternoon: After lunch continue the tours to see BAYON TEMPLE (decorated with four Buddha faces on each of 49 towers), a Buddhist monastery in heart of Angkor Thom complex. Next stop we continue the visits to see SOUTH GATE OF ANGKOR THOM CITY which is the last capital of the Khmer Empire surrounded by thick walls, containing five monumental gates built by King Jajavarnam VII, between 1181 and 1218.

Evening: We drive back to the hotel and overnight on your own.

Stop At: Banteay Srei, Siem Reap Cambodia
Morning: After breakfast at the hotel we continue the visit to see PREAH KHAN TEMPLE, the biggest temple in big circuit built in 13th century by king Jayavarman 7th is now more famous for being the location of where many scenes were shot of the temples here and there truly is something for everyone. A walk around this maze like temple can hold many surprises. Then we drive to experience the most famous temple of BANTEAY SREI (the Citadel of Women). This small pink sandstone temple (late 10th century) is considered as the precious stone or the crown jewel of classical Khmer arts with the delicate beauty of its carvings. Then we drive back and have a stop to see the beautiful countryside and the activities of handicraft made by the locals. Next stop, we continue the visit to see BANTEAY SAMRE temple. Banteay Samre was built in the middle of 12th century by King Suryavarman II (reigned 1113 - 1150) and dedicated to Hindu God Visnu, with art style of Angkor Wat. The proportions of Banteay Samre are plended. A unique feature is an interior moat with laterite paving, which when filled with the water must have given an ethereal atmosphere to the temple. All of buildings around the moat are on a raised base with horizontal moldings, decorated in some area with figures framed by lotus buds.

Noon: Take a break for lunch near the temple area.

Afternoon: After lunch we continue the tour to see PRE RUP TEMPLE. The architectural design of Pre Rup is superb and gives the temple fine balance, scale and proportion. The Cambodians have always regarded this temple as having funerary associations but reasons is unknown. The name Pre Rup recalls one of the rituals of cremation in which the silhouette of the body of the deceased, outline with its ashes. Later we proceed to see EASTERN MEBON TMEPLE, which is known as a Temple Mountain dedicated to God Siva (Hindu God), was built in 10th century on an artificial island in the middle of a reservoir.

Evening: We drive back to the hotel and rest. Overnight on your own.
Duration: 8 hours

Stop At: Chong Kneas Floating Village, Tonle Sap, Siem Reap Cambodia
Morning: After breakfast at your hotel we will pick up you from the lobby and start the sightseeing to Tonle Sap Great Lake to observe the livelihood of Cambodian people on the FLOATING VILLAGE of CHONG KNEAS. Tonle Sap is the largest fresh water lake in South-east Asia. The area of the lake changes six times a year because of the monsoon season. We take a boat to a fishing village to observe local lifestyles. Chong Kneas is a cluster of three villages of floating houses built within the flooded plants. Flooded mangrove forest surrounds the area and is home to a variety of wildlife including crab-eating macaques. Then we drive back to the city to experience the WORKSHOP ARTISAN to discover the traditional Khmer techniques used for stone and wood carving, lacquering and gilding, the numerous items made in the workshops are inspired by the rich Cambodia heritage.

Noon: Take a break for lunch in the city.

Afternoon: After lunch we continue the visits to SILK FARM to learn about how the Cambodian people make the handmade product from cocoon silk. Then we drive to the WAR MUSEUM, the recall of civil wars weapons for terrorism. Later, we drive to visit the KILLING FIELD MUSEUM, in Wat Thmey pagoda known as a small killing field in Siem Reap. The Wat Thmey Pagoda is notable for being an area that served as one of the killing fields during the Khmer Rouge regime in the country. The Khmer Rouge was Cambodias ruling communist party from 1975 to 1979 and was responsible for one of the worst mass killings more than two million people during the 20th Century. If time permitted, we continue a visit to the ANGKOR NATIONAL MUSEUM. Angkor National Museum is the world-class museum that reveals the legend of Golden Era of Khmer Kingdom. It takes bride in revealing the royal historical path of this Golden Era of Khmer Kingdom through the state of the art multimedia technology to provide visitors a full picturesque story of the legend in an easy understanding way.

Evening: We will transfer you back to your hotel and rest. End of tour.
Duration: 8 hours