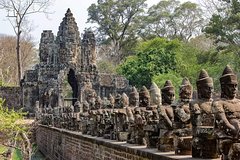 Experience the best of Siem Reap on the Great Lake of Tonle Sap and the awesome Temples of Angkor. Explore the countryside and the real life of Cambodian local people. Take the boat cruise to visit the fishing villages, flooded forest and learn about the worlds second largest freshwater Tonle Sap Lake. Discovery one of Asias greatest kingdoms from your historian guide and see major temples during sunrise & sunset.

Stop At: Kampong Phluk Floating Village, Siem Reap Cambodia
We will visit the Kampong Phluk first and it takes around 3 hours on the boat .

Kampong Phluk is a cluster of three villages of stilted houses built within the floodplain of the Tonle Sap about 16 km southeast of Siem Reap. The villages are primarily Khmer and have about 3000 inhabitants between them. Flooded mangrove forest surrounds the area and is home to a variety of wildlife including crab-eating macaques. During the dry season when the lake is low, the buildings in the villages seem to soar atop their 6-meter stilts exposed by the lack of water. At this time of year many of the villagers move out onto the lake and build temporary stilted houses. In the wet season when water level rises again, the villagers move back to their permanent houses on the floodplain, the stilts now hidden under the water. Kampong Phluk's economy is, as one might expect, based in fishing, primary in shrimp harvesting.
Kampong Phluk sees comparatively few foreign visitors and offers a close look at the submerged forest and lakeside village life as yet unperturbed by tourism. The area can be reached by boat from the Chong Khneas or by a combination of road and boat.
Duration: 3 hours

Stop At: Roluos, Cambodia
This is our last stop to visit then after finish it we will return to the hotel for your relaxing.

This afternoon visit the Roulos group of temples. This collection of monuments was built in the late 9th century as a capital city for King Jayavaraman II. We take time out here to explore the temples (Preah Ko, Bakong and Lolei)
Duration: 3 hours

Stop At: Pre Rup, Siem Reap Cambodia
We will begin with leaving from the hotel at 7:30 am and then go straight to see the main temple in a grand tour where you will see the following Temples listed below:

We will visit the crematorium for the Cambodian Royal Family known as, Pre Rup Temple built in the 10th century, Neak Phan Temple & The city of sword known as, Preas Khan Temple (enjoy beautiful landscape views at each temple)

After Lunch at the local restaurant we will continue to see amazing pink sand stone with clear detail carving, well-known as Lady temple.

Your tour will finished at this temple and our driver will drive you and drop you off at your accommodation or pub-street on your request.
Duration: 1 hour

Stop At: Neak Pean, Angkor Wat, Siem Reap Cambodia
Neak Pean at Angkor, Cambodia is an artificial island with a Buddhist temple on a circular island in Jayatataka Baray, which was associated with Preah Khan temple, built during the reign of King Jayavarman VII. It is the "Mebon" of the Preah Khan baray.
Duration: 1 hour

Stop At: Banteay Srei, Siem Reap Cambodia
Banteay Srei or Banteay Srey is a 10th-century Cambodian temple dedicated to the Hindu god Shiva. Located in the area of Angkor, it lies near the hill of Phnom Dei, 25 km north-east of the main group of temples that once belonged to the medieval capitals of Yasodharapura and Angkor Thom
Duration: 2 hours

Stop At: Angkor Thom, Angkor Wat, Siem Reap 17259 Cambodia
Angkor Thom (Khmer: អង្គរធំ pronounced [ʔɑːŋ.kɔː.tʰum]; literally: "Great City"), (alternative name: Nokor Thom, នគរធំ) located in present-day Cambodia, was the last and most enduring capital city of the Khmer empire. It was established in the late twelfth century by King Jayavarman VII.[1]:378382[2]:170 It covers an area of 9 km², within which are located several monuments from earlier eras as well as those established by Jayavarman and his successors. At the centre of the city is Jayavarman's state temple, the Bayon, with the other major sites clustered around the Victory Square immediately to the north. It is also a very big tourist attraction, and people come from all over the world to find it.
Duration: 1 hour

Stop At: Bayon Temple, Angkor Thom, Siem Reap Cambodia
The Bayon (Khmer: ប្រាសាទបាយ័ន, Prasat Bayon) is a richly decorated Khmer temple at Angkor in Cambodia. Built in the late 12th or early 13th century as the state temple of the Mahayana Buddhist King Jayavarman VII (Khmer: ព្រះបាទជ័យវរ្ម័នទី ៧), the Bayon stands at the centre of Jayavarman's capital, Angkor Thom (Khmer: អង្គរធំ).[1][2] Following Jayavarman's death, it was modified and augmented by later Hindu and Theravada Buddhist kings in accordance with their own religious preferences.

The Bayon's most distinctive feature is the multitude of serene and smiling stone faces on the many towers which jut out from the upper terrace and cluster around its central peak.[3] The temple has two sets of bas-reliefs, which present a combination of mythological, historical, and mundane scenes. The main conservatory body, the Japanese Government Team for the Safeguarding of Angkor (the JSA) has described the temple as "the most striking expression of the baroque style" of Khmer architecture, as contrasted with the classical style of Angkor Wat (Khmer: ប្រាសាទអង្គរវត្ត).
Duration: 45 minutes

Stop At: Angkor Wat, Sangkat Nokor Thum, Siem Reap Cambodia
We begin with a pre-dawn departure from your hotel for sunrise outside Angkor Wat. Soak up the atmosphere of dawn at Angkor, from the edge of one of the ancient library pools. We then explore the interior of the great temple, spending a thorough two hours discovering the corridors, central chambers and upper terraces of this truly great temple.
Duration: 3 hours

Stop At: Preah Khan, Angkor Wat, Siem Reap Cambodia
Preah Khan is a temple at Angkor, Cambodia, built in the 12th century for King Jayavarman VII to honor his father. It is located northeast of Angkor Thom and just west of the Jayatataka baray, with which it was associated. It was the centre of a substantial organisation, with almost 100,000 officials and servants
Duration: 1 hour

Stop At: Ta Prohm Temple, Angkor Archaeological Park, Siem Reap 21000 Cambodia
Ta Prohm (Khmer: ប្រាសាទតាព្រហ្ម, pronunciation: prasat taprohm) is the modern name of the temple at Angkor, Siem Reap Province, Cambodia, built in the Bayon style largely in the late 12th and early 13th centuries and originally called Rajavihara (in Khmer: រាជវិហារ). Located approximately one kilometre east of Angkor Thom and on the southern edge of the East Baray, it was founded by the Khmer King Jayavarman VII[1]:125[2]:388 as a Mahayana Buddhist monastery and university. Unlike most Angkorian temples, Ta Prohm is in much the same condition in which it was found: the photogenic and atmospheric combination of trees growing out of the ruins and the jungle surroundings have made it one of Angkor's most popular temples with visitors. UNESCO inscribed Ta Prohm on the World Heritage List in 1992. Today, it is one of the most visited complexes in Cambodias Angkor region. The conservation and restoration of Ta Prohm is a partnership project of the Archaeological Survey of India and the APSARA (Authority for the Protection and Management of Angkor and the Region of Siem Reap).[3]
Duration: 2 hours 10 minutes

Stop At: Ta Nei Temple, Siem Reap Cambodia
Ta Nei was extended initially toward the east and then enlarged with three small gopuras on the north, west and south and a large east gopura that is essentially a part of the inner, galleried enclosure. As at Ta Prohm, city walls were begun but were probably never finished. Today only two outer gopuras exist to the west and east.

The length of the urban enclosure was 190m. Inside are two long, narrow tank moats on the north and south. The original east gopura now stands isolated, and the original northeast and southeast corner towers are now part of the gallery.

Special Offer - Book by February 23 to save 25% off our previously offered price! - Book Now!