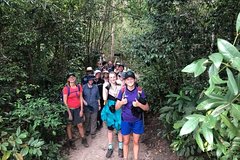 Phnom Kulen has major symbolic importance for Cambodia as the birthplace of the ancient Khmer Empire, for it was at Phnom Kulen that King Jayavarma II proclaimed independence from Java in 804 CE. Jayavarman II initiated the Devaraja cult of the king,99101 a linga cult, in what is dated as 804 CE and declaring his independence from Java of whom the Khmer had been a vassalage state (whether this is actually "Java", the Khmer chvea used to describe Champa, or "Lava" (a Lao kingdom) is debated, as well as the legend that he was earlier held as a ransom of the kingdom in Java.
Phnom Kulen was further developed under the rule of Udayadityavarman II, who made it the capital of his empire and constructed many temples and residences as well as the 1000 Lingas at Kbal Spean. At its peak, the Kulen development was larger than modern-day Phnom Penh and one of the largest cities in the 11th-centuryworld.

6:00pm Arriving & Welcome by the community
6:10pm Getting a tent for accommodation
7:00pm Having Dinner with local food

Day 2
At 7:30am Noddle Breakfast and Coffee
At 8:00am - 12:00am, Visiting Veal Preah Kral, Preah Ang Thom(Big Buddha),
Water Fall Thousand of Lingars and more !

We would love to inform you that when we are return back to Siem Reap town, so you can advise us to drop you somewhere in city center instead of hotel of you want .

Special Offer - Book by February 28 to save 20% off our previously offered price! - Book Now!