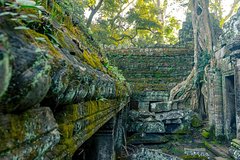 Visit Angkor Wat complexe, the Unesco World Heritage Site, which is one of the most important archaeological site in South-east Asia built by the great Khmer King Soriyavaraman II in the early on 12th century and dedicated to Vishnu God Hindu religion.

Embark a private tour to discover and explore the magnificent and enigmatic Angkor Wat temples.

Visit the South Gate of Angkor Thom and then go to visit central Angkor Thom (Bayon consists 54towers and 216faces of Buddhisatva Avalokesvara) which was built by the Angkors greatest King Jayavaraman VII at the end of 12th , Baphoun which was the one the most spectacular temples in its heyday,

Note: we will take a small rest for lunch about 45 minutes, our tour guide will recommend you a good restaurant around a temple area.

Visit the Terrace of Elephant which was used for the public ceremonies and served as the stage for the kings grand audience, Terrace of leper king one of Angkors mysteries, the ancient Royal Palace Phimeanakas.

Visit the fabulous Ta Prohm temple which is embraced by the enormous fig trees.

It has left in much the same condition in which it was found.

The gigantic roots of the fig trees embraced the ruins and the jungle surroundings have made it one of the Angkors most popular temples.

Visit Banteay Kdei was built by the King Jayavarman VII in the late of 12th century to the early of 13th century. The temple sprawling, largely non-restored, monastic complex in much the same style of Ta Prohm temple.

It was originally constructed over the site of an early temple and functioned as a Buddhist monastery under king Jayavarman VII.

Watching the sunset view from Angkor Wat which is one of the most important archaeological site in South-east Asia which was built by the great Khmer King Soriyavaraman II in the early on 12th century dedicated to Vishnu God Hindu religion.