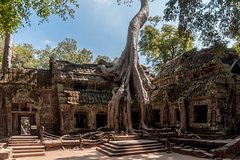 No one is actually prepared when entering Angkor Archaeological Site for the very first time. Its sheer size, dotted with spiritual remnants of years of constructed are smeared strategically, and with meaning, across hundreds of square kilometres of land in the very heart of Cambodia.

Since its first signs of placing itself as the centre of the world in the 9th century, Angkor Wat has been the crown on the palatial grounds of what is now of immense historical and cultural value to the country. Added to this immense stone structure with its five towers are the temple remains of the Ta Phrom, an example where conservationists left its structure untouched with nature roaming freely through its walls and foundation.

Guided by a true local expert on the history of Angkor, you will set out first to the main entrance for purchasing your entrance pass (not included) before driving towards the Angkor Wat, the sites most treasured temple.

Towering over the surrounding tropical forests, Angkor Wat exists as one of this planet's last great-unexplored tourist destinations. Built during the reign of King Suryavarman II in the early 12th century, Angkor Wat is constructed following the model of the temple mountain symbolizing the Mount Meru, home of the gods. The centre of Siem Reaps main attraction is well known for the more than 2,000 Apsara dancers decorating the temple both inside and outside its walls. How important this mesmerizing monument of magnificence is for the Khmer is clear; Angkor Wat is figured on Cambodia's national flag as the temple symbolizes the soul of the Khmer people.

Next, we head over to the Ta Phrom. One of the very few temples that have been left largely in its natural state since its re-discovery by French explorer, the Ta Phrom is seen as one of the most must-sees of Angkor as much of the jungle has not been cleared and it looks very much as most of the Angkor monuments would have appeared when European explorers first stumbled across them. Surrounded by jungle, its labyrinth of stone hallways is overgrown with the roots of massive banyan trees, which envelop the stones like tentacles. It is one of the largest temples at Angkor and is adored by many for its mystical charm.

After this visit, we head back to Siem Reap and your booked accommodation, ending this 4-hour exploration of two of Angkors most recognisable sites.