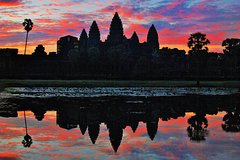 Our local expert agents will bring you to exploring through the spectacular over Cambodias Ancient City-Siem Reap and Real Community Life of Cambodian.

✍ Morning (Small Tour and Sunrise Pick up from the hotels lobby at 4:45 am)

Stop 1: (Visiting Angkor Wat) is a temple complex in Cambodia and one of the largest religious monuments in the world. Originally constructed as a Hindu temple dedicated to the god Vishnu for the Khmer Empire, it was gradually transformed into a Buddhist temple towards the end of the 12th century.

Stop 2: Angkor Thom, which means Big City during 12 th century and its one of the largest sites in the Angkor Archaeological Park. This huge walled city with a moat was the last great capital of the Angkorian Empire. When Jayavarman VII defeated the Cham invaders in 1181, and recaptured the Angkorian capital, he instituted a massive building program throughout the empire.

Stop 3: Bayon Temple, at the heart of Angkor Thom is the 12th-century Bayon, the mesmerising, if slightly mind-bending, state temple of Jayavarman VII. It epitomises the creative genius and inflated ego of Cambodias most celebrated king. Its 54 Gothic towers are decorated with 216 gargantuan smiling faces of Avalokiteshvara, and it is adorned with 1.2km of extraordinary bas-reliefs incorporating more than 11,000 figures.

Stop 4: (Visit Baphuon Temple) which is a temple at Angkor, Cambodia. It is located in Angkor Thom, northwest of the Bayon. Built in the mid-11th century, it is a three-tiered temple mountain built as the state temple of Udayadityavarman II dedicated to the Hindu God Shiva. After We walking around 200 meters long to see The Terrace of Elephant, Terrace of Leper King and Royal Palace.

Stop 5: (Ta Prohm) is the modern name of the temple at Angkor, Siem Reap Province, Cambodia, built in the Bayon style largely in the late 12th and early 13th centuries and originally called Rajavihara. As we known this temple: the photogenic and atmospheric combination of trees growing out of the ruins and the jungle surroundings have made it one of Angkor's most popular and also in The Thumb Rider Movie.

After Lunch Back to Hotel

✍ Afternoon tour Start 3.00 PM (Pick Up from your Hotel again)

Stop 1 visit Phsar Leu Market ( Phsar Leu Thom Thmey) It is where you truly experience the walking tour by seeing interesting daily trading, fresh vegetables, herbs meats, fishes and take your opportunity to try local breakfast or homemade deep fries, snacks, cakes as well as fresh homegrown fruits including papayas, bananas, watermelon and other exotic fruits. The main entrance to the market is found in the centre of the facade facing onto National Road 6 and is the best place to start.