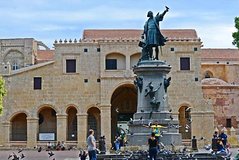 This 10 to 12-hour tour to Santo Domingo de Guzman will immerse you in the Dominican culture by visiting a natural monument known as "Los Tres Ojos" with its three beautiful lagoons, then head out to stop at the Columbus Lighthouse before venturing down to Cuidad Colonial, the first city of the new world -an UNESCO listed World Heritage. Whether you tour the Alcazar de Colon, the first Cathedral, or just browse around a city center boutique, this day out will have something for everyone. This is a fantastic cultural excursion where you learn so much about the Dominican Republic and have some serious fun at the same time.

Visit a series of underground watercorpse that has some interesting facts to display about the first inhabitants of the island.

Pass By: Columbus Lighthouse (Faro A Colon), Av. Ana On the water side of Los Tres Ojos, near the airport in the Sans Souci district, Santo Domingo 11604 Dominican Republic

See the lighthouse and learn what it was built to commemorate.

Guided walk inside the Alcazar, see part of the lifestyle of the first European rulers of the Island.

1.3 miles walk from the Alcazar to the Cathedral with an opportunity to stop at the National Mausoleum Guarded daily by a presidential honour guard, this former 18th-century Jesuit church became the countrys national mausoleum in 1956. It houses the remains of Dominican heroes, such as Gregorio Luperón, Salomé Ureña, José Núñez de Cáceres, Concepción Bona, Emilio PrudHomme, Juan Sánchez Ramírez and María Trinidad Sánchez, among others.

With audioguide available, explore the first Cathedral built in america and learn some more about that period of America's history.