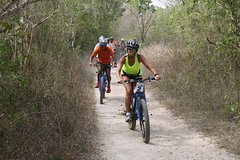 The excursion begins in Dominicus, through the main road till you enter to a beautiful trail by the sea that takes us to the small town of Bayahibe. There we will see the beauty of the local nature and cosmopolitan style.

Then we make a visit to the public beach enjoying a beautiful landscape until arriving at Cotubanama Park. There we will walk a beautiful path that takes us to a cave that was used by the Taíno Indians in pre-Columbian times. In the interior of the cave there is a spring of crystalline waters in which we can freshen up.

Then we make a short walk along a path where we can appreciate several plants of our flora and a typical kiln to make coal.

We return to the bicycle and end up leaving the park where our tour ends.  Note: you can select the tour in electric mtb or normal mtb.

Everything starts with the pick up at the hotel and we head to the town Dominicus, which is a place where many foreigners of Italian origin especially live. In Dominicus we will see some local handicraft stalls and, crossing its streets, we arrive at a beautiful sand beach that leads to the village of Bayahíbe with a beautiful view of the sea.

Bayahíbe is an indigenous word. Its meaning is not known with certainty, but with the references that we have we can think that it was linked to the water and possibly to the sea. It might indicate a place on the sea shore where mollusks abounded.

Bayahíbe has remained populated since prehistoric times, which is not surprising due to its privileged location. Fresh freshwater springs, an excellent bay to be used as anchorage, abundance of coral reefs populated by fish, molluscs and crustaceans, the land area with mangroves and areas susceptible of being cultivated.

The first time the Europeans visited the Bayahíbe area was between 14 and 15 September 1494. Christopher Columbus, who came to explore the islands of Cuba and Jamaica, during the course of his second trip to America, decided to recognize the South coast of Hispaniola. On September 14, she arrived at Labanea Island, giving her the name of Catherine in honor of the daughter of the Catholic kings. The next day there is evidence that he arrived on the island Adamanay, to which his traveling companion, Miguel de Cunneo named Bella Savonese, originated the name of Saona, as it is known today.

In the village we can appreciate the crystalline springs with beautiful fish. Then we continue to the public beach and we see an old cemetery dating from the time of discovery. On leaving the village of Bayahibe, we entered the community of "Nuestro Padre Nuestro", which became Cotubanama National Park in honor of the cacique that presided over the cacicazgo de Higüey of which Bayahibe was a part.

In this park we will appreciate the flora and fauna of the place and visit a cave used by the Tainos Indians in pre-Columbian times with some figures drawn by them. Inside the cave there is a beautiful and crystalline spring in which we can refresh ourselves for a moment.

When leaving the cave we will walk along a path to see a coal kiln used by peasants of the place. Then we return to the bicycle to leave the park where the tour ends.